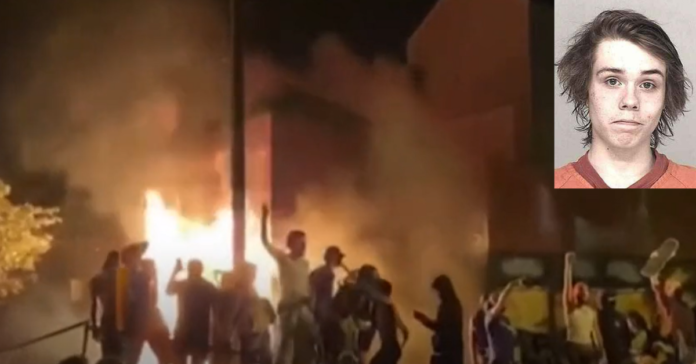 A Minnesota rioter who pleaded guilty to an arson charge for his role in setting a Minneapolis police station on fire during protests last May just learned his fate from the judge. Dylan Shakespeare Robinson, 23, got fined $12 million for his role in burning the station.

He has to start paying the whopping fine after he gets out of prison. He will serve four years in prison first and will be on probation after he gets out. Worse for Robinson, the state will set up a payment plan and will garnish what they can or want from any money he makes over the course of his life until he pays the $12 million.

“On the night of May 28, 2020, Mr. Robinson chose to depart from lawful protest and instead engaged in violence and destruction. The arson at the Minneapolis Police Department’s Third Precinct put lives at risk and contributed to widespread lawlessness in Minneapolis,” said acting U.S. Attorney Anders Folk.

“With today’s sentence, Mr. Robinson is held accountable for his actions.”

“He is bearing the sentence for the other thousand people who participated,” Robinson’s attorney William Mauzy said. “Many others, far more culpable than Mr. Robinson, were not identified.

Three other men – Bryce Michael Williams, 27, Davon De-Andre Turner, 25, and Branden Michael Wolfe, 23 – pled guilty to the same charge as part of a plea agreement but have yet to be sentenced.

ABC5 reports, “Court documents state on the night of May 28, 2020, Robinson went to the Third Precinct where a crowd of hundreds had gathered. At one point, the crowd began shouting, “Burn it down, burn it down.” Soon after, a fence that was designed to keep people out of the building was torn down.

“Robinson, along with other co-conspirators, breached the fence and entered the building. Robinson lit an object held by the unidentified co-conspirator who threw it toward the Third Precinct building with the intent that it would start a fire or fuel an existing fire.”

According to the US Attorney’s office, which prosecuted the case, the restitution will be collected in a variety of ways, including wages, bank accounts, retirement garnishments and a monthly pay plan typically set by a judge.

Robinson will only be able to pay a “miniscule amount toward that”, his lawyer Mr Mauzy said, adding that he expected the three other defendants to be ordered to pay a portion of the damages fee.

“None of the defendants have an ability to pay a significant sum,” he said.

The US Attorney’s office did not respond to an immediate request for comment on how Robinson may be able to afford the fine.

Michael Paul, of the FBI’s Minneapolis field office in a statement, insists the high fine is fair.

“The danger posed by the defendant in this case was very real,” he said.

The sentencing “sends a clear message” that when someone conducts a violent act that breaks federal law, they will be held accountable, Mr Paul said.

It is not the first time a US court has imposed such a large sum. In 2018, a judge in Oregon ordered a 15-year-old to pay more than $36m (£27m) after he admitted to starting a forest fire that raged for months.

A lawyer for the 15-year-old called the amount “absurd” and “absolutely silly”.

In his ruling, the judge said the figure was “clearly proportionate to the offence”, because it did not exceed the financial damages caused by the fire.

23 year old Dylan Shakespeare Robinson has been ordered to pay $12,000,000 for his part in setting fire to the Minneapolis Police Dept during the BLM riots in May 2020. – dailywire

To be paid after his four year prison sentence. pic.twitter.com/jOZRB4pXE2

A Brainerd man was sentenced Wednesday to four years in prison for his role in burning the 3rd Precinct police station in Minneapolis during the unrest following George Floyd’s death. | https://t.co/8aw3dXPxxi