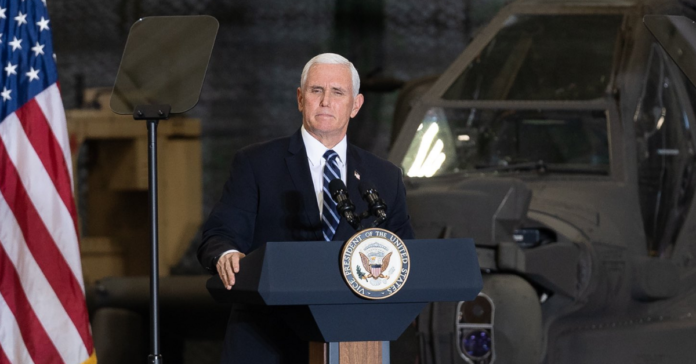 Mike Pence went on a short farewell tour to speak to the military and reminded them of one of the Trump administration’s greatest accomplishments – no more stupid foreign wars.

Pence thanked the 10th Mountain Division, a division that has deployed to Afghanistan and Iraq nearly 50 times since 2001, and others at Fort Drum.

In October, the White House issued a statement that touted military accomplishments that did not require a major deployment of troops.

The statement pointed to the deaths of Abu Bakr al-Baghdadi and the Iranian general, Qasem Soleimani as military achievements.

Forbes ran an article in December that said no matter your feelings about Trump’s term in office, he has done more “in four years to shift the vector of U.S. military preparations than most accomplish in eight.”

Loren Thompson, a national security contributor to the magazine, pointed out that President Obama launched a troop surge in 2009 in Afghanistan and sent troops to Iraq in 2014 while the ISIS insurgency raged.

Trump, on the other hand, “bought the U.S. military four years of relative peace in which to rebuild from endless wars.”

Trump’s critics would likely highlight what they called reckless threats to countries like Iran and North Korea as an example of his bellicose nature.

But his overtures to Kim Jong-un, even though they did not pan out, was seen by some critics as a sincere effort for a diplomatic breakthrough.

I’m proud to report with just a few days left in our Administration, our Administration is the first in decades that did not get America into a new war. That’s Peace through Strength. pic.twitter.com/uiSNxi67aT