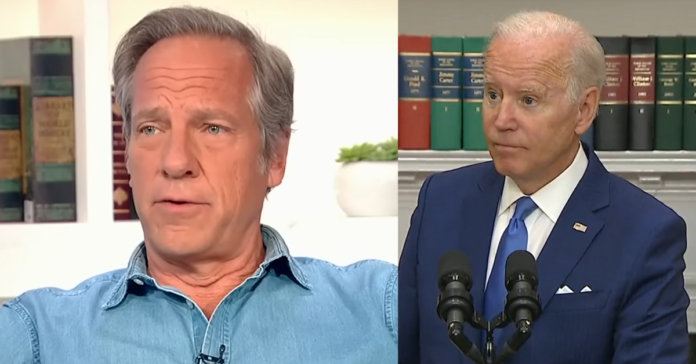 Rowe said: “I get videos almost every day now from people we’ve featured on ‘Dirty Jobs’ and on ‘How America Works.’ They are just sending me videos of them at the gas pump. And some of them are filling up, you know, 18-wheelers.

“The cost of fuel touches every single thing that matters in this country, from food production and transportation, obviously, all of it.”

Steve Doocy asked Mike if the truckers are buying Joe Biden’s desperate claim that the rising fuel prices are the fault of Vladimir Putin.

Rowe responded, “The ones I know aren’t.”

“Guy said to me the other day: ‘It’s like falling down the stairs in slow motion, you know.

“The cost of… there’s no food without fertilizer in this country.

“The cost of fertilizer is hundreds, hundreds of percent higher than it was.”

Pump prices rose again over the past week due primarily to the high cost of crude oil. Fear of a global energy supply disruption due to Russia’s invasion of Ukraine outweighs the demand concerns prompted by the impact of COVID-19 on China’s economy.

The cost of a barrel of crude continues to hover around $100. With the oil price accounting for about 60% of pump prices, the national average for a gallon of regular is now $4.19, an increase of seven cents since Monday, April 25.

“As long as the supply remains tight, it will be hard for crude oil prices to fall and consumers will in turn face higher prices at the pump,” said Andrew Gross, AAA spokesperson. “It now costs drivers in the U.S. about $23 more to fill up than a year ago.”