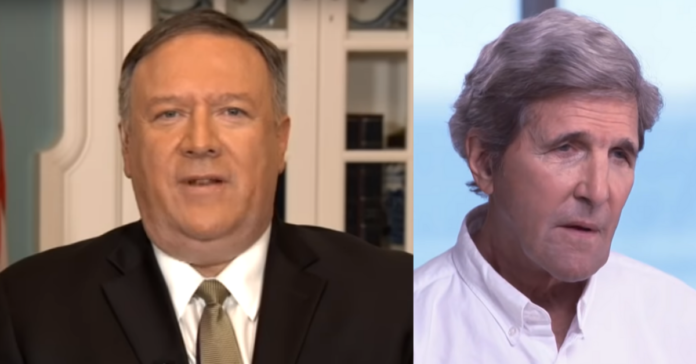 Former Secretary of State Mike Pompeo dropped the hammer on the hapless John Kerry over a report that he told Iran’s foreign minister that Israel was behind hundreds of covert attacks inside Syria. Kerry denies the charge but others have said these were all common knowledge so there is some confusion over what was said and by whom.

Sean Hannity said, “I look at this, did John Kerry in the Trump years, Mr. Secretary, did he conduct covert foreign policy negotiations? The very thing that we were lectured General Flynn did with his soon to be counterpart when he was going to be National Security Adviser with the Iranians. And do you believe that Muhammad Zarif is correct in what he’s saying? Is that a possibility? And if it is, what would that mean to you?

Pompeo said, “Well Sean, thanks for having me on. It looks like from this reporting, that it’s confirmed what we can already believe, which was that while I was briefing President Trump, Kerry was briefing Zarif on intelligence that related to Israeli operations, I hope that’s not true.

“We know he did that, he’s admitted as much, what he was talking about. We believe that he was absolutely telling the Iranians hang on, this pressure campaign, the power that’s being exerted by America against you, it’ll be over, we’ll win this election.

It’ll just be four years, you can hang in there. Don’t, don’t for a minute negotiate with the Trump team. And so Secretary Kerry’s got an awful lot of explaining to do.

“I’ll tell you what President Trump and our team did. We had the same issue. They were driving IRGC, the Expeditionary Forces, the Iranians were driving IRGC Coast Guard cutters close to our ships.

“We need to make sure that our sailors have the ability to defend themselves. You know, Sean, people may have forgotten.

“But when Secretary Kerry was in office last time, when he was the secretary of state, the Iranians not only put cutters around our ships, but they seized our sailors, you remember those pictures?

“They were sitting on the pier, they were kneeling down. They were being held by the Iranians and only an apology from Secretary Kerry was able to get them back. That wouldn’t have happened on our watch. It didn’t happen on our watch.

“We isolated the Iranians Sean like they’d never been isolated before. You name those Arab states, add the Emirates as well, they all understand that this deal puts them at risk and our Israeli friends, the Jewish homeland is under threat, if we give the Iranians this money again, it reduces American security as well.

“I do not for the life of me understand why they would give the Iranians something in exchange for almost nothing, just for this thing that appears to be an article of faith for them to go back into this deal, to say they did it this, this crown jewel of the Kerry Secretary of State time, it would be a big mistake. And it puts Americans at risk,” he said.