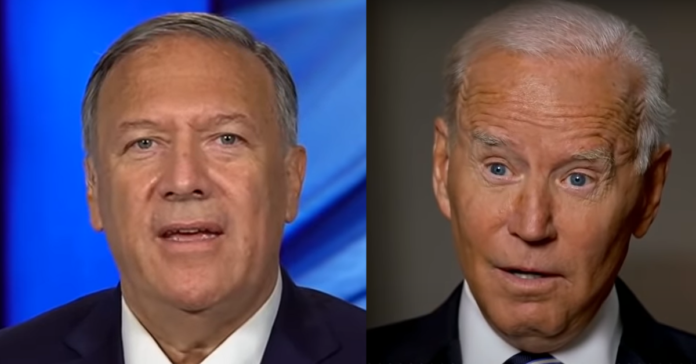 Former Secretary of State Mike Pompeo dropped the hammer on President Joe Biden for his handling of the chaos in Afghanistan. Biden’s attempt to evacuate Americans from the country is not going smoothly and with time running short Pompeo called it “a debacle of significant proportions.”

Pompeo said: “Today, what President Biden said frankly made it worse. I didn’t hear a single thing from him today that would have given comfort to those families. There’s still no plan to get these Americans back.

“I didn’t hear a single thing that would give comfort to the very allies you spoke about. This is a debacle of significant proportions. We haven’t seen anything like this, the United States, in an awfully long time.

“America has the tools to fix this. Our military could certainly figure out a way to go get these folks back and to destroy some of these billions of dollars in equipment that we left behind, but it’s going to take American resolve and leadership, and President Biden has refused to show this for the entire time.”

Pompeo added: “As far as how it would have been different, we had an approach that we literally worked on from the very beginning.

“So President Trump had made clear in his campaign, he wanted to get our young men and women home as quickly as he could. We were striving to achieve that.

“He also made very, clear both when I was CIA director, but more directly to me when I was the Secretary of State, that we had a second objective—and that was to make sure we could do so in a way that was orderly, that got equipment home, that got American civilians out, and then protected our second objective there, which was to continue to be able to reduce the risk that we ever had an attack on the homeland from that place.

“But at the same time, we made clear to the Taliban that here are our set of conditions. If you honor those conditions, we will honor ours, which is to draw down our forces. We we did that in a measured, step by step way, from about 15,000 to about 2,500. But we never got to the conditions where President Trump felt comfortable that we could go to zero and so we didn’t go to zero.”

Biden better move quickly because the situation is unstable and any spark could set it off.

The US military is establishing “alternative routes” to Kabul airport because of a threat the terror group ISIS-K poses to the airport and its surroundings, as President Joe Biden met with senior officials Saturday to discuss the security situation in Afghanistan and counter-terrorism operations against the Islamic State offshoot.

“There is a strong possibility ISIS-K is trying to carry off an attack at the airport,” a US defense official told CNN.

The Pentagon said Saturday that approximately 17,000 people have been evacuated by the U.S. from Afghanistan in the past week as the administration seeks to ramp up evacuation efforts.

Maj. Gen. Hank Taylor of the Joint Staff said there have been around 22,000 people total evacuated from Afghanistan since the end of July, including approximately 2,500 Americans. The majority of the evacuations have taken place since Aug. 14.

Evacuation efforts have become exceedingly difficult since the Taliban took over, as U.S. citizens and Afghan allies have scrambled to get to the airport in Kabul. The Taliban seized control of the capital city Sunday.