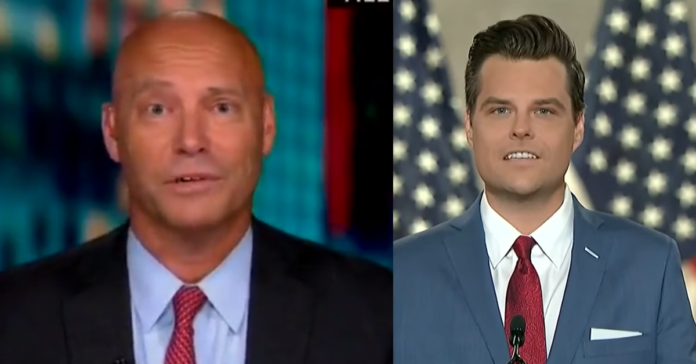 Mike Pence’s chief of staff Marc Short, went on CNN and accused GOP Congressman Matt Gaetz of child sex trafficking in a major escalation between two warring factions in the Republican Party. The two sides have been endorsing different candidates in races across the country.

Short was not happy when Gaetz said in a Turning Point USA Student Action Summit: “On that note, let me just say what everybody here knows: Mike Pence will never be president. Nice guy. Not a leader.”

“Well, I don’t know if Mike Pence will run for president in 2024, but I don’t think Matt Gaetz will have an impact on that.

“In fact, I’d be surprised if he was still voting, it’s more likely he’ll be in prison for child sex trafficking by 2024.

“And I’m actually surprised that Florida law enforcement still allows him to speak to teenage conferences like that, so I’m not too worried about Matt Gaetz,” he said.

According to The Hill:

“Short served as chief of staff to Pence for nearly two years and was in that role on the day of the Capitol riot, which is being investigated by the Justice Department as well as a select House committee.

“Gaetz has denied the sex trafficking allegations, and no charges have been filed against him.

“The New York Times first reported the existence of the federal investigation into Gaetz in March 2021.”

When Joe Biden came into office, inflation was at 1.4%.

Inflation has surged to 9.1%, hitting a new FOUR-DECADE high! This is outrageous! @JoeBiden’s reckless leadership is doing nothing but hurting the American people!https://t.co/DUOENBylFG