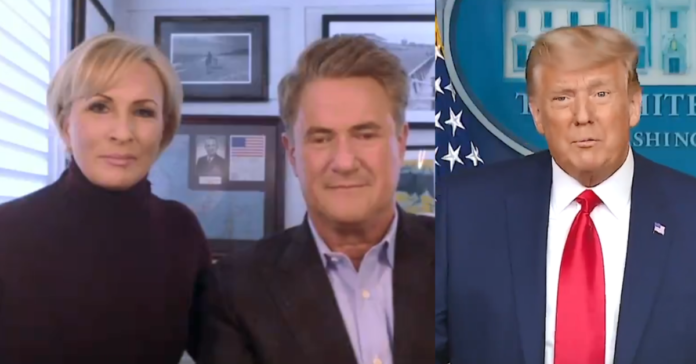 MSNBC host Mika Brzezinski went on the View today and gave up the game saying that President Donald Trump should be investigated after he leaves office. She also called Bill Barr weak.

Sunny Hostin asked, “Mika, you know, President-elect Biden is already facing calls from some in the Democratic Party to investigate and prosecute President Trump.

“One of the senior prosecutors in the Mueller investigation just also came forward and said that the next attorney general should hold Trump accountable for any criminal behavior in office despite how divisive that could be for the country. What’s the best move for the sake of the country, in your opinion?”

Brzezinski said, “Well, Joe and I disagree. I want to say for the record — we disagree on this.

“I think it’s enough with letting things go by.

“How much are we going to just let just pass by from this presidency, which has come so close to destroying our democracy, more than any other president?

“And I do think that there needs to be a degree of investigations, and also a postmortem on what happened, and our institutions, where they softened, where they didn’t hold.

“I think more of a check on the attorney general in the future.

“That really, I think, showed weakness in our democracy.

“We need to learn from this so that we never go through something like this again.

“And I understand, you know, sometimes doing a pardon for the sake of unity and moving forward — this is different.

“You can’t let all these things go by and just pretend that they’ll never happen again.

“We have to do something about the many perils that this president put toward our democracy.”

.@morningmika on the calls to investigate and possibly prosecute Trump: “You can’t let all these things go by, and just pretend that they’ll never happen again. We have to do something about the many perils that this president put toward our democracy.” https://t.co/cVclFZQmjA pic.twitter.com/ql2dibbytp