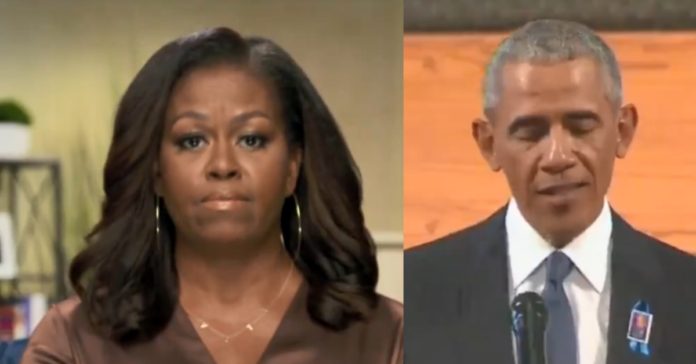 Brien Michelle admitted “there were times that I wanted to push Barack out of the window” before she said their marriage was strong.

“If that breaks a marriage, then Barack and I have been broken off and on but we have a very strong marriage.”

Michelle after admitting her marriage was broken many times and wanted to push Barack out of a window then gave relationship advice to the crowd, ‘You can’t Tinder your way into a long-term relationship.”

Mrs Obama compared the choice of a husband or wife to selecting a basketball team – saying she had married ‘my version of LeBron’.

If we looked at marriage as a real team, you want your teammate to be a winner. You want LeBron, you know,’ she said.

She added: ‘There were times that I wanted to push Barack out of the window. And I say that because it’s like, you’ve got to know the feelings will be intense.

‘But that doesn’t mean you quit. And these periods can last a long time. They can last years.’

Mrs Obama expanded on her thoughts in an Instagram post on Sunday, saying that marriage ‘takes a lot of work, a lot of honesty with ourselves and our partners’.

‘That’s one thing I’ve learned. I’d love to hear some of the things you’ve learned about marriage and about yourself,’ she told her 42million followers.

The Obamas will celebrate their 28th wedding anniversary on October 3, after Michelle marked last year’s occasion by saying the couple were ‘still feeling the magic that brought us together all those years ago’.

‘Twenty-seven years ago, this guy promised me a life full of adventure. I’d say he’s delivered,’ she said.

As president, Barack Obama spent the evening of his 20th anniversary debating Republican challenger Mitt Romney ahead of the 2012 election.

‘There are a lot of points I want to make tonight, but the most important one is that 20 years ago I became the luckiest man on Earth because Michelle Obama agreed to marry me,’ he told the audience.