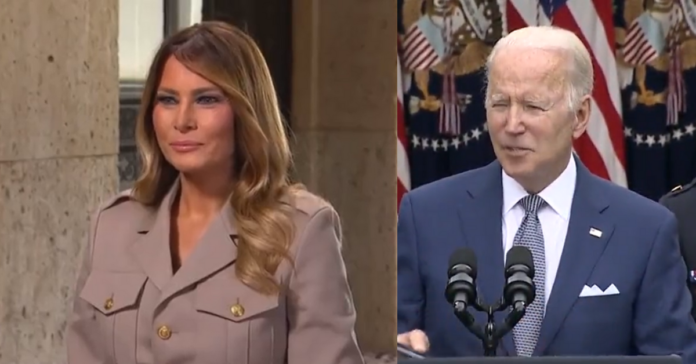 Former First Lady Melania Trump doomed President Joe Biden, Vice President Kamala Harris, and the entire team behind the scenes who have led America from one preventable debacle to another.

Melania sat down for an interview with Fox News’ Pete Hegseth. Fox News has released clips of the interview where Melania rips our failed leadership. “So, being out of D.C. and having that time, what do you make of the state of the country right now?” Pete asked.

Melania said: “I think it’s sad to see what’s going on, if you really look deeply into it. I think a lot of people are struggling and suffering and what is going on around the world as well. So it’s very sad to see and I hope it changes fast.

Hegseth asked about the latest Biden blunder, the shortage of baby formula.

“It’s been in the news, as someone who loves children and has dedicated so much to their betterment, how do you feel when you see a shortage of baby formula and families just struggling to get basic items like that?”

Melania said: “It’s heartbreaking to see that they are struggling and the food is not available for children in the 21st century in the United States of America.”

“Why is it happening?” Hegseth asked.

.@foxandfriends’ Pete Hegseth has an exclusive interview with First Lady .@MELANIATRUMP this weekend. Looking forward to hearing from her! 🇺🇸#MAGAQueen pic.twitter.com/VBaOXx9AVJ

Melania said: “They’re biased and they have likes and dislikes and it’s so obvious. And I think American people and everyone sees it. It was their decision and I have much more important things to do and I did in the White House than being on the cover of Vogue.”

Biden said only a mind reader could have known this was coming. But he is incompetent because his own administration has been warning states about this since February.

Brian Deese, Director of the National Economic Council, said on Friday morning that the White House had been urging states to take action since February.

‘We actually gave states the guidance on using flexibility the day after this recall happened in February,’ he told CNN’s Kaitlin Collins.

Biden said the problem would be solved in a matter of weeks but that is not true according to the CEO of one of the four companies that control 90% of the market.

The head of one of the four companies that control 90 percent of the U.S. market for baby formula has warned that the shortages nationwide could last until the end of the year, and President Joe Biden’s critics mocked his claim that ‘only a mind reader’ could have predicted the current crisis.

On Friday CEO of formula giant Perrigo, Murray Kessler, told Reuters he expects shortages and heightened demand to last for the ‘balance of the year.’

Kessler said their factories in Ohio and Vermont are running at 115 percent capacity, to compensate for Chicago-based Abbott’s shutdown, which happened in mid-February – but added that supplies would remain erratic for the remainder of 2022.

‘We have stepped up and are killing ourselves to do everything we can,’ Kessler said.

At the request of the FDA, Perrigo is focusing on four items: the store-brand versions of Similac Pro Sensitive and Pro Advance, and Enfamil Gentle Ease and Infant, Kessler said.

The company added that it is making other formulas as well.

It also has a smaller business making some national formula brands, including Bobbie.