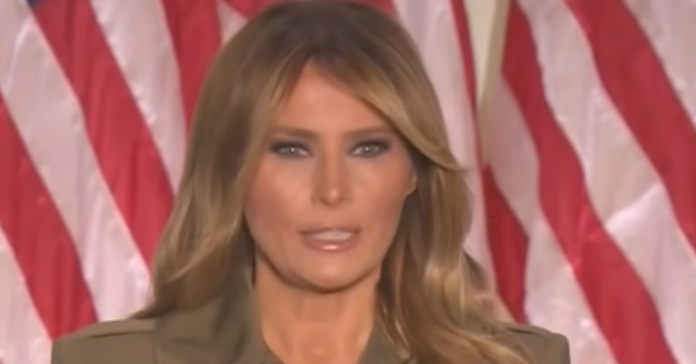 Melania Trump fired back at her former chief of staff Stephanie Grisham over leaked allegations made in Grisham’s upcoming book. The news that she had a book coming out took Washington by surprise and the early hints are she will trash some members of the Trump administration.

Grisham also served as former President Donald Trump’s press secretary, but was fired by Mark Meadows when he was named Trump’s chief of staff so she may want to settle some scores.

A statement provided by the office of Melania Trump said: “The intent behind this book is obvious. It is an attempt to redeem herself after a poor performance as press secretary, failed personal relationships, and unprofessional behavior in the White House.”

“Through mistruth and betrayal, she seeks to gain relevance and money at the expense of Mrs. Trump.”

Grisham alleges that on Jan 6 she texted Melania asking, “Do you want to tweet that peaceful protests are the right of every American, but there is no place for lawlessness and violence?”

She said a minute later, Melania said “No.” Grisham said she resigned shortly after that. She also compares Melania to Marie Antoinette writing that she sees Melania like “the doomed French queen. Dismissive. Defeated. Detached.”

Grisham’s book is scheduled to be released on Oct. 5.

A publishing source said that “Stephanie knows she’s stirred up a hornet’s nest with this book.”

It includes potentially unflattering nuggets about other officials with whom Grisham tangled during her time in the White House, according to the source.

Among them are JARED KUSHNER and MARK MEADOWS, who removed her as White House press secretary, the person said.

“Stephanie has secrets about Trump that even the first lady doesn’t know,” the source said. “Secrets that he doesn’t want her to know. They will be in this book.”

Since news of the book broke late last week, numerous Trump-world figures have contacted Grisham to see how they are depicted in the book or to offer private messages of support, according to the source.

Grisham, who is very familiar with how the Trumps operate, is also bracing for a potential smear campaign and legal fight if anyone sues to try to prevent publication.

She knows, the source said, that there’s a hunt on to try to get a copy of the book to the Trumps; she’s received calls from people she barely knows asking for an early copy.

Stephanie Grisham is a JAVANKA loyalist so writing about Melania should come as no surprise! Spilling more marital trash between Melania and Donald will have zero consequences for him & keeps Ivanka and Jared out of the headlines. ⁦@MichaelCohen212⁩ https://t.co/LQWfDO9eKs