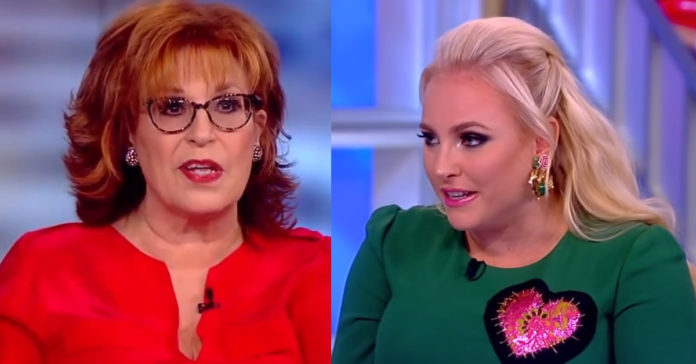 Joy Behar is a classic Trump hating wanna be celebrity who uses hate and anger to boost her own ratings and save her failing show.

The View has been teetering on the edge of despair for years and like most in the media, Trump has proven to be pure gold.

Trump gets ratings but what really gets ratings is bashing Trump. Normally, on every network save Fox News, the Trump bashing goes unchallenged.

Ms. Behar noted that Mr. Bush, who died Friday at age 94, signed the Clean Air Act amendments of 1990, which she called “one of the most sweeping environmental statutes ever.”

“This president that we have now is trying to unravel everything that he did, and Obama did,” she said of Mr. Trump. “And if I ever become a one-issue voter, it will be about pollution and the greenhouse effect and the fact that—”

Ms. McCain interjected, suggesting that her colleague’s commentary on Mr. Trump was a distraction from honoring Mr. Bush’s legacy.

“Can we focus on the president, please?” she asked, visibly annoyed. “I don’t want to talk about Trump. We’re honoring a great president’s past.”

“Um, excuse me a second, please,” Ms. Behar fired back. “I want to talk about the difference—”

Ms. McCain interjected again, saying, “I’m not interested in your ‘one issue voter’ when a president just passed.”

“I don’t care what you’re interested in, I’m talking!” Ms. Behar yelled back.

“Well I don’t care what you’re interested in either, Joy!” Ms. McCain responded in kind.

Whoopi stepped in and cut to commercial before Joy could respond with her typical venom and the truth is Joy was wrong again.

It is not all about Trump all the time, even if your desperate audience wants that, you must show some decorum now and again, or one would think Joy should.