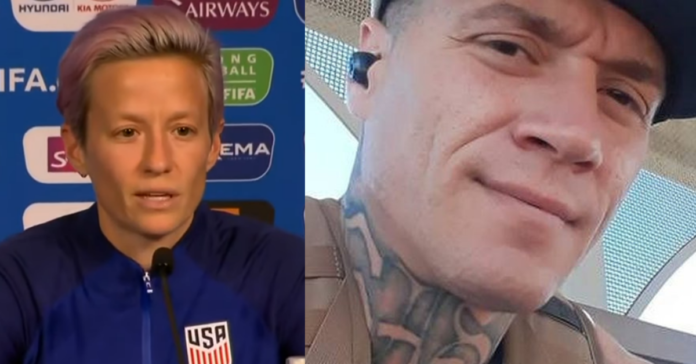 In news no one saw coming, Trump nemesis Megan Rapinoe has quite the interesting backstory.

Specifically, her brother Brian Rapinoe who taught her how to play soccer is an ex-skinhead who has spent half his life locked up for various and oftentimes violent crimes.

Shockingly, while in prison, he continued his life of mayhem and racked up new and violent charges while inside.

These new crimes added to his sentence and got him sent to Pelican Bay and other notorious prisons where he spent years in solitary confinement.

This guy is a total thug – a real bad seed – and while he blames it on drugs and says he is reformed now, and everyone deserves a second (in his case a third and fourth) chance, it is shocking news.

From ESPN: BY 18 YEARS OLD, Brian had moved on to harder drugs — heroin, specifically — and he became more reckless. He was charged with car theft, evading arrest and a hit-and-run while driving under the influence of drugs — and now, as an adult, his juvenile detention days were over. He was sent to prison. Within months, he aligned himself with the white prison gang and was inked with Nazi tattoos. A swastika on his palm; lightning bolts on his fingers, sides and calves.

These tattoos devastated his family. “The prejudice, the racism — it was so against the way he’d been raised,” Denise says. “He wasn’t that kind of kid. He was kind, his nature was so loving.”

To Brian, the swastikas weren’t about prejudice and racism at that point — they were about heroin and survival. To support his addiction, he needed to be, in his words, “an active participant in prison culture.” The California prison system was segregated. That meant Brian lived strictly among the white population. “You come in as a kid, and there are these older dudes you think you respect, spouting ideas, and you kind of listen,” Brian says. “I developed a protect-your-own mentality.”

He tried to explain that to his mother. The gang was a family, he said; it was a place to belong. “I told him, ‘This is not who we are,'” Denise says. “‘This is not who you are.'”

Megan was as heartbroken as her mother. “I thought [the tattoos] were horrible,” she says. “I still think they’re horrible. I could rationalize them: I understood that when he first got in there, he was searching for identity, trying to survive.”

BRIAN BECAME HEAVILY involved in gang life and racked up charges while doing time: possession of drugs, possession of a deadly weapon, three assaults on other white inmates. He spent eight of his 16 years in prison in solitary confinement for this behavior. By 2007 — as he was turning 27 years old — he was transferred to Pelican Bay State Prison in Northern California, the state’s only super-max-security prison.

While general population is segregated, solitary confinement is not, and every inmate gets one hour out of his cell to walk the pod. Here, the protect-your-own thinking began to fall away for Brian. “You start relating to people beyond your hood, your area, your color,” he says. “It doesn’t take long before you start talking with each other, seeing how much you have in common. Back there, it’s just you in the cell, and the man next to you is just a man himself.”

Three times a week, inmates also get three hours outside, albeit in his own cage. “In the yard, you start talking [to other guys] — sports, music, my sister is always a big ice-breaking conversation. You say [to them], ‘When we go back in from yard, you can look at my pictures,’ or you say, ‘Here’s something I wrote.’ Maybe you become good friends — like me and Monster did.”

By 2010, the now 30-year-old had a new understanding of what the white supremacist insignias represented. He had his face tattoos lasered off. The swastika on his palm became a spider web; the Nazi lightning bolts became skulls. He did not want any racial insignias on his skin. They did not reflect who he was. But he was still using heroin — and the next year, he was arrested for selling it.

Brian was behind bars once again — this time at Donovan State Prison in San Diego.