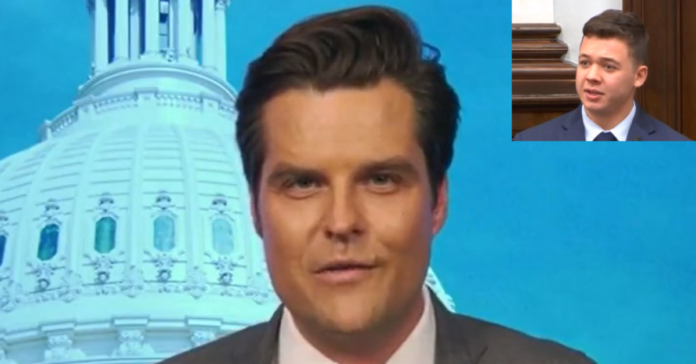 Rep. Matt Gaetz told Newsmax that he may hire Kyle Rittenhouse. Gates said he believes Kyle Rittenhouse is innocent and he would not only consider hiring him, but may reach out to Kyle and see if he wants to be a congressional intern.

“You know what, Kyle Rittenhouse would probably make a good congressional intern. We may reach out to him and see if he’d be interested in helping the country in additional ways,” Gaetz said.

“He is not guilty. He deserves a not guilty verdict and I sure hope he gets it,” Gaetz said. Gaetz also talked about the sentencing of “QAnon Shaman” Jacob Chansley.

Chansley got 41 months in federal prison Wednesday from the judge in what many are calling a harsh sentence.

“This QAnon Shaman is a relatively harmless, nonviolent vegan and the notion that he has to be in prison for three and a half years to settle some sort of political score defies justice,” he said.

The judge just banned MSNBC from the court in the Rittenhouse case. From Fox News:

The Wisconsin judge presiding over the case against Kyle Rittenhouse on Thursday banned staff from MSNBC from entering the Kenosha courthouse for the remainder of the trial.

In a brief statement before the court Thursday, Judge Bruce Schroeder addressed an incident in which a person who identified himself as an employee for MSNBC allegedly followed a sealed bus with blocked out windows as it left the courthouse to transport jurors to an undisclosed location.

“I have instructed that no one from MSNBC news will be permitted in this building for the duration of this trial,” Schroeder said.

“This is a very serious matter and I don’t know what the ultimate truth of it is, but absolutely it would go without much thinking that someone who is following the jury bus – that is an extremely serious matter and will be referred to the proper authorities for further action.”