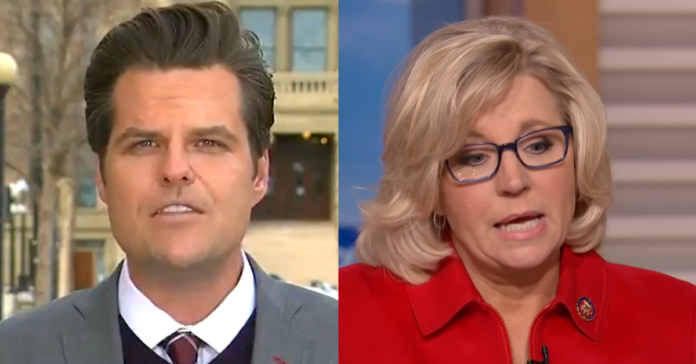 Rep. Matt Gaetz (R-Fla.), went to Wyoming to hold a press conference outside the state Capitol in Cheyenne where he called for Liz Cheney’s ouster from Congress.

Hundreds gathered to hear the Florida Republican go after the No. 3 Republican in the House, Cheney. “This is my first time in Wyoming. I’ve been here for about an hour and I feel like I already know the place a lot better than your misguided representative, Liz Cheney,” Matt said,

“Our battle is no longer just Republican vs. Democrat, it’s not just red team versus blue team. Absolutely not — we’ve got to put America first. Those are the old battles of yesteryear. But people have always come to the great frontiers of Wyoming to win the future — that’s why I’m here,” he said.

“Liz Cheney is a lot like Congress — deeply unpopular and owned by special interests,” he added.

“She’s taken more money from PACs than people. She works for them, not you.”

“The truth is that the establishment in both political parties have teamed up to screw our fellow Americans for generations.”

“The private insider club of Joe Biden, Mitch McConnell, Mitt Romney, Nancy Pelosi and Liz Cheney, they want to return our government to its default setting – enriching them,” he said.

“They want to turn our government to its default setting, enriching them, making them more powerful at our expense, but we can stop and it starts right here in Wyoming,” he said.

Donald Trump Jr. called in to the press conference and went after the daughter of former Vice President Dick Cheney and her father.

“It seems like Liz Cheney’s favorables are only slightly worse than her father’s shooting skills,” Trump Jr. said.

Cheney Must Go: @MattGaetz says Liz Cheney must be removed because she no longer speaks for republicans or republicanism #MAGA #AmericaFirst #Dobbs pic.twitter.com/6c5WTp4W7a

Gaetz beginning. Said if Liz Cheney had a rally, all her supporters would fit in an elevator, and there would "still be room for social distancing." pic.twitter.com/Toy7J4E4Ca

Rep. Matt Gaetz: "This is my first time in Wyoming. I've been here for about an hour and I feel like I already know the place a lot better than your misguided representative, Liz Cheney." pic.twitter.com/ZncWZSJWeH