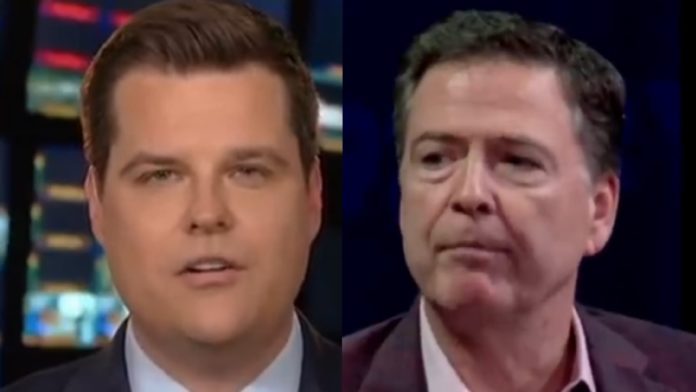 James Comey was hauled before Congress one last time before the Democrats take the gavel and will most certainly change the tone and tenor of the House.

The investigations into Trump will begin and those into what in the heck James Comey and the rest were doing will wither and die.

Which is odd because one would think the Democrats would want to get to the bottom of what Comey did – after all, even James admitted Hillary blames him for her loss.

And James Comey was trying to shift blame to the New York FBI office and even alleged they were leaking to Rudy Giuliani which forced his hand.

So Matt Gaetz wanted to set the record straight before the transfer of power happens. From Fox News:

On “America’s Newsroom” Monday, Gaetz (R-Fla.) said it’s conceivable that Comey forgot some things, but it’s “bizarre” that his lapses in memory just so happen to block congressional oversight.

“The leaking of Comey, the lying about it to Congress, the inconsistencies with the person that came after him, Andrew McCabe, certainly raises a lot of questions about how the FBI was operating during Comey’s leadership,” Gaetz said.

“He claims to remember with great detail what the president said, but when we ask, ‘Well, how did the people at the FBI react? How did the general counsel react? How did your deputy director react?’ he was unable to give any details as to the viewpoints they offered,” Gaetz said.

He accused Comey of using his position to act as a “political hack,” and he said there was “very clearly a double standard” in Comey’s handling of the Russia probe and the Hillary Clinton email investigation.

“The [Department of Justice] inspector general said very clearly that Jim Comey did not follow the protocols and procedures of the FBI,” Gaetz said.