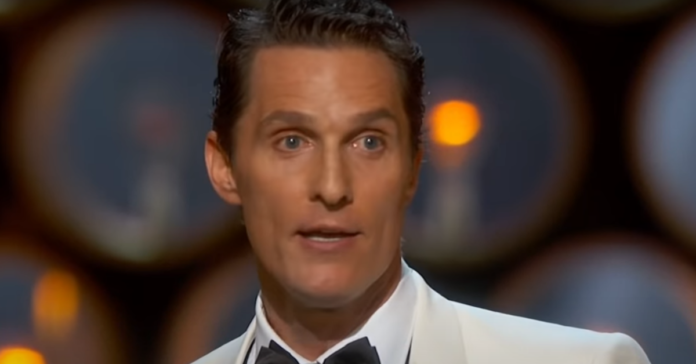 Matthew McConaughey ripped the illiberal left calling them condescending and patronizing in another sign the backlash against the left’s PC culture is beginning.

“We’re making people persona non grata because of something they do that is right now deemed wrong or it’s the hot point in a hot topic right now. You can’t erase someone’s entire existence. Where the heck does some forgiveness go,” he said.

He talked about the bias against Christians in Hollywood:  “I have had and I won’t throw any people under the bus.”

He continued, “But I have had moments where I was on stage receiving an award in front of my peers in Hollywood, and there were people in the crowd that I have prayed with before dinners many times, and when I thanked God, I saw some of those people go to clap, but then notice that, ‘bad thing on my resume’ and then sit back on their hands,” McConaughey said on Joe Rogan’s top-rated podcast.

“I’ve seen people read the room and go, ‘whoa, that wouldn’t bode well for me in the future,’ if for getting a job or you’re getting votes or what have you,” McConaughey added.

“I have seen that; I’ve witnessed that. I don’t judge them for it, I just wish, you know that it seems like a silly argument.”

McConaughey said the bias against Christians is from the “illiberal” left “condescending and patronizing” half the population.

“One of the things that some people in our industry, not all of them, but there’s some that go to the Left so far—as our friend Jordan Peterson says— that go to the illiberal left side so far that it’s so condescending and patronizing to 50% of the world that need the empathy that the liberals have,” he said.

McConaughey also noted that it’s wrong to “illegitimize” someone “because they say they are a believer, it’s just so arrogant and in some ways hypocritical.”