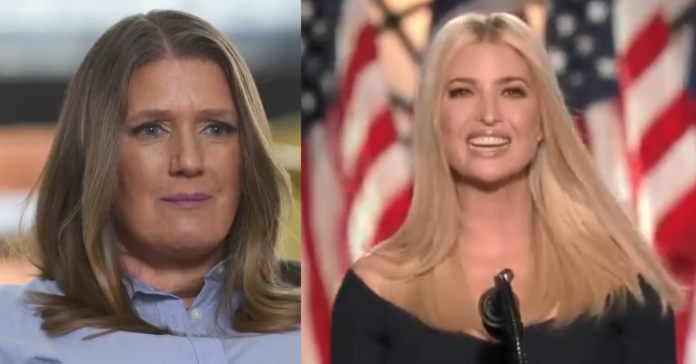 “I think that with all of his kids, his adult children anyway, it’s a very transactional relationship,” Trump said.

“They all know on which side their bread is buttered, so to speak. And none of them has ever been independent of him, financially or otherwise.”

“They also understand that in my family money and power are the only currencies. And she seems quite determined to get as much as she can out of her association with her father.”

“But just because she speaks more softly and in a more moderate tone, it doesn’t mean that her lies aren’t equally vicious and don’t need to be equally defended against.

She added: “I thought her entire performance was appalling and it’s just a way of putting a nice veneer on a message that should repulse every American.”

Here are some excerpts from Ivanka’s speech so you can judge for yourself.

My father has strong convictions. He knows what he believes and he says what he thinks. Whether you agree with him or not, you always know where he stands.

I recognize that my dad’s communication style is not to everyone’s taste and I know that his tweets can feel a bit unfiltered, but the results, the results speak for themselves.

He is so unapologetic about his beliefs that he has caused me and countless Americans to take a hard look at our own convictions and ask ourselves what do we stand for? What kind of America do we want to leave for our children? I am more certain than ever before we want a future where our kids can believe in American greatness. We want a society where every child can live in a safe community and go to a great school of their choice.

Four more years. I remember one evening in early February of 2018 we were in the Oval Office with my father’s top economic advisors and the president was pushing to keep the promise he made to renegotiate the bad trade deals that had gutted millions of middle class jobs.

Most of his advisors argued that the economy was so strong following our historic tax and regulatory cuts that it didn’t make sense to risk rocking the boat. After the meeting as I walked with my father back towards the residence he said, “You know, the reason this has never been done before is because our leaders haven’t had the guts. When the economy is good, they settle for good and when things are bad, they don’t have the will or ability so they kick the can until it’s someone else’s problem.”

He was right. If my father didn’t take on these fights, no one would. In the months that followed, President Trump refused to settle for a good deal. He wanted a great deal and ultimately that is exactly what we got.

I have seen all of my life how my dad believes in the potential of each individual. Earlier this evening, we were all inspired by the incredible testimony of Alice Johnson. A great-grandmother who was sentenced to life in prison for a first-time non-violent drug offense.

I was with my father when he decided to commute Alice’s life sentence. Together we watched Alice leave prison after nearly 22 years, as she ran into the arms of her family and they celebrated a joyful reunion, my father got very quiet. I could see the emotion on his face. After a long silence, he looked at me and said, “Imagine how many people there are just like Alice.”

From that point on, he became a voice for those who had been unfairly silenced in our prison system. President Trump rectified the disparities of the 1994 Biden Crime Bill that disproportionately hurt African-Americans.”