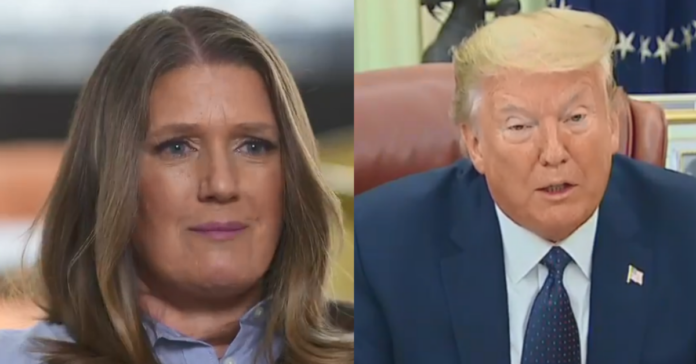 Mary Trump, President Trump’s niece, won her court case against the President and his family and can do what she wanted – a media tour to promote her new book.

She is airing the Trump family dirty laundry in a best seller called, “Too Much And Never Enough: How My Family Created the World’s Most Dangerous Man.”

Not much in there is new information but today she made news when ABC News’s George Stephanopoulos asked her what she would tell Trump if she was in the Oval Office with him right now.

Mary Trump paused and then responded, “Resign.” Nice, huh? Then she said he was “utterly incapable of leading this country, and it’s dangerous to allow him to do so.”

Trump also recalled seeing the president in the Oval Office about three months after he was inaugurated. She said that her uncle “already seemed very strained by the pressures” at the time.

“And I just remember thinking, ‘He seems tired. He seems like this is not what he signed up for,’” she added.

Prior to the book’s publication, a judge released Trump from a gag order, allowing her to speak publicly about her family.

“Now that the unconstitutional gag order has finally been lifted, we are sure the White House and America are looking forward to finally hearing what Mary has to say,” her spokesperson said in a statement obtained by the Washington Examiner.

The White House has pushed back on her claims and has questioned the timing of the book.

“Mary Trump and her book’s publisher may claim to be acting in the public interest, but this book is clearly in the author’s own financial self-interest,” White House deputy press secretary Sarah Matthews said. “President Trump has been in office for over three years working on behalf of the American people — why speak out now?”

EXCLUSIVE: @GStephanopoulos: "If you're in the Oval Office today, what would you tell [Pres. Trump]?"

Watch more from the interview on @GMA tomorrow: https://t.co/jlmWepscVm pic.twitter.com/j4IxTBRiJU