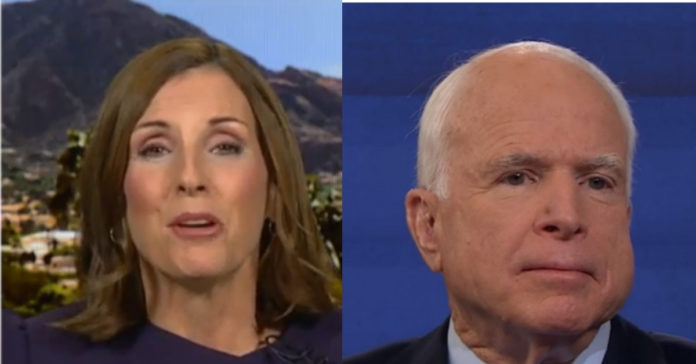 In an act of poetic justice, Martha McSally is heading to the U.S. Senate. McSally lost a very tough race in November – the race wasn’t decided until weeks after the election it was so close.

“All her life, Martha has put service first — leading in the toughest of fights and at the toughest of times,” said Governor Ducey said as he appointed her to fill the seat when Sen Kyle steps down.

“She served 26 years in the military; deployed six times to the Middle East and Afghanistan; was the first woman to fly in combat and command a fighter squadron in combat, and she’s represented Southern Arizona in Congress for the past four years.”

“With her experience and long record of service, Martha is uniquely qualified to step up and fight for Arizona’s interests in the U.S. Senate.”

“I thank her for taking on this significant responsibility and look forward to working with her and Senator-Elect Sinema to get positive things done.”

“Over the last year, I’ve traveled across this great state, meeting with countless Arizonans, and listening to them,” said McSally.

“I’ve heard about the challenges they face and the hopes they have for the future – and I’ve learned a lot. I am humbled and grateful to have this opportunity to serve and be a voice for all Arizonans. I look forward to working with Senator-Elect Kyrsten Sinema and getting to work from day one.”

“Because she currently represents Arizona in the US Congress, Martha McSally certainly has the knowledge and experience to represent our State in the Senate,” said Senator Jon Kyl.

“Moreover, she is highly energetic, smart and committed to finding practical solutions to problems facing our State and Nation. She is an excellent choice.”

Ducey had appointed former Sen. Jon Kyl to the seat in September, but Kyl, after serving for several months, announced plans to resign at the end of the year. According to Ducey’s office, Kyl’s resignation will be effective Dec. 31.

McSally was defeated by Democratic Rep. Kyrsten Sinema in this year’s midterm election for the seat held by retiring GOP Sen. Jeff Flake. Her appointment means she will now serve alongside her opponent, something Ducey noted in his statement.