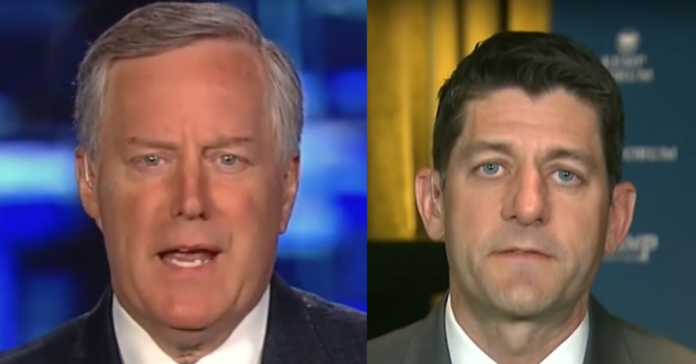 Paul Ryan is a fraud and a disgrace. Ryan made headlines this week when he ripped President Trump and whined that he had to escape Trump by retiring.

A profile in courage Paul Ryan is not. Ryan wants to have it both ways – he wanted to ram through unpopular and very swampy provisions into bills Trump was going to sign and now wants to trash Trump to set up his political or economic future.

He was never on the right side of any issue and in fact, Trump pretty much ran against everything Ryan had ever done or ever believed.

So while Ryan’s comments are not surprising. From The Hill:

House Freedom Caucus Chairman Mark Meadows (R-N.C.), whose group was often at odds with Ryan, said that while Ryan may have attempted to tamp down policies he didn’t agree with, the president’s instincts on policy resonated more with GOP voters.

“Paul Ryan’s advice typically served to push the president in a direction that would make the swamp happy but most of the people who voted for Donald Trump unhappy,” Meadows said. “The Speaker missed the real reason why the president consistently enjoyed higher approval ratings than anyone in Republican leadership.”

“I’d remind people that Paul Ryan was never a Trump supporter and he bailed out on our conference,” one Trump ally told The Hill. “He is no longer relevant.

Other members dismissed Ryan’s assertion in the book that Trump “didn’t know anything about government.”

Scalise — who highlighted the accomplishments Ryan and Trump achieved despite “not seeing eye to eye” on certain issues — defended the president’s understanding of government by citing Trump’s remarks on different policy areas during a trip to Camp David and their discussions while working on the 2017 GOP tax law.

“I wouldn’t agree with that assessment if that’s what Paul said, because I was in meetings with Paul, and the president, on a number of issues and the president is well versed on domestic policy,” he told reporters.

Rep. Tom Reed (R-N.Y.) said while Trump’s approach to governing may be unconventional, he doesn’t see his decision to break the status quo as a negative.

“I think, you know, the power of President Trump is he’s a disrupter,” Reed said. “The status quo of D.C. has to change and the president was changing it. And I’m a big fan of a disrupter in this town, because this town, if you think it’s working, then you’re in the wrong business.”