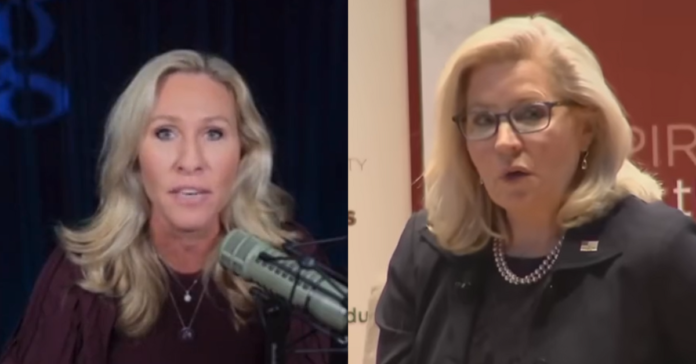 Lake said: “Dear Liz, Thank you for your generous in-kind contribution to my campaign. Your recent television ad urging Arizonans not to vote for me is doing just the opposite.

“In fact, my team tells me your commercial should add another 10 points to our lead! I guess that’s why they call the Cheney anti-endorsement the gift that keeps on giving.

“Thank you again for the huge boost to our campaign.

“Our campaign donations are skyrocketing and our website nearly crashed from traffic as people rushed to learn more about my plan to put Arizona First and join our historic movement.”

I just want to thank @HagemanforWY for kicking your ass.

I’m really enjoying getting to know her this week.

After the race was called for Katie Hobbs, Lake’s opponent, Cheney gloated:

“I just want to thank @HagemanforWY for kicking your ass.

“I’m really enjoying getting to know her this week. You’re welcome.”

The Fox News Decision Desk can project that Democratic Secretary of State Katie Hobbs will be the next governor of Arizona. She defeats GOP candidate and former local news host Kari Lake.

Per Arizona law, the race may go to a recount.

Lake is a former TV news anchor who stepped down last year after 22 years with the Fox affiliate in Phoenix to run for governor.

Thanks in part to her strong support for former President Trump and his unproven claims that the 2020 election was “stolen” and rigged,” Trump endorsed and heavily backed Lake as she narrowly won the GOP nomination over a candidate backed by term-limited GOP Gov. Doug Ducey.

Lake highlighted her “common sense conservatism” as she centered her campaign on the issues of border security, homelessness, banning critical race theory in Arizona classrooms, support for school choice, and opposition to abortion.