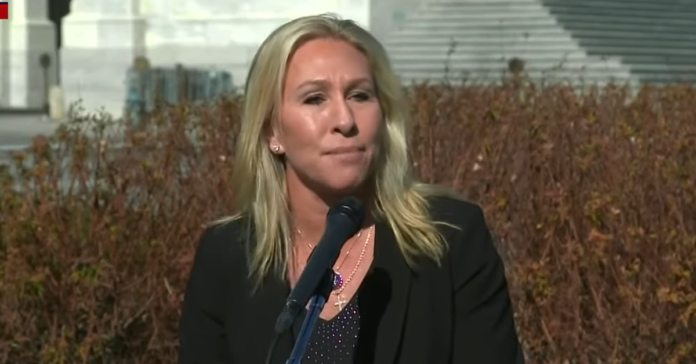 Marjorie Taylor Greenefired back after getting suspended from Twitter for what they call ‘repeated violations.’ Media figures on the left immediately gloated and praised Twitter for making the move.

But they forgot she still has her official account from Congress so she is not thrown off the platform totally, yet. But Twitter did confirm that they permanently suspended her personal page.

Silicon Valley has too much power without the corresponding accountability to be arbitrary of truth. And they don’t want to be, or at least they say that.

Congress needs to act to protect everyone’s free speech. This should be bipartisan because if they come for one group other groups not far behind.

Greene fired back saying on her getter page:

“When Maxine Waters can go to the streets and threaten violence on Twitter, Kamala and Ilhan can bail out rioters on Twitter, and Chief spokesman for terrorist IRGC can tweet mourning Soleimani but I get suspended for tweeting VAERS statistics, Twitter is an enemy to America and can’t handle the truth.

“That’s fine, I’ll show America we don’t need them and it’s time to defeat our enemies.”

“Did your martini taste a bit hypocritical?

“Don’t you just love the freedom Republicans give you in Florida?

“No masks or vaccine mandates.

“No stifling communist policies you constantly legislate & vote for.

Notice how gleeful the regime toadie is to report this https://t.co/UVHcHrv51w