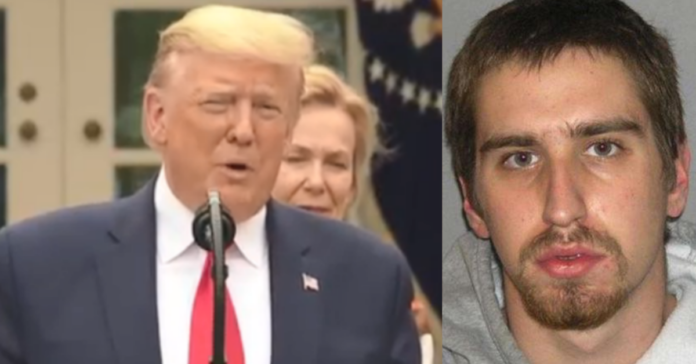 A federal judge just threw the book at a man who threatened President Trump a Northampton County district attorney and gave him 20 years in federal prison.

Shawn Christy was sentenced to 20 years in federal prison by Judge Mariani who called him a “painting a picture of a man to be feared.” Authorities charged 28-year-old Shawn Christy of McAdoo with threatening to “put a bullet” in Trump and Northampton County District Attorney John Morganelli. He also threatened to use “lethal force” against police.

He was found guilty on 12 counts during his trial on November 26 of last year.

From WNEP: Christy, from McAdoo in Schuylkill County, was caught in Ohio in September of 2018 after a massive manhunt that spanned six states and Canada. While he was on the run, federal officials say Christy broke into several homes and businesses, stealing food, firearms, and vehicles.

Federal officials said after making threats online, Christy went on a three-month crime spree, breaking into homes, businesses like Hazleton Oil where he used to work, Skipper Dipper in Schuylkill County, even the Scranton School for the Deaf and Hard of Hearing.

Police said he stole food, firearms, and vehicles in a total of six states and Canada before being caught in Ohio.

Christy said he has been unfairly targeted by the government and represented himself in court.

A federal judge sentenced Christy to 20 years in prison after a lengthy hearing Thursday. During the hearing the judge referred to Christy as “painting a picture of a man to be feared.”

His mother and a friend made statements on his behalf at the hearing.

For about an hour and a half of the hearing Christy objected to details of a pre-sentence report. During the hearing he said that he knew the government did not like him and that he felt dehumanized.

The judge recommended Christy be sent to Butner prison in North Carolina because he can receive proper mental health treatment there. No word yet on an appeal.

In November, a federal jury convicted Shawn Christy of 12 charges, including threatening the president of the United States and former Northampton County District Attorney John Morganelli and transporting stolen firearms across state lines. The 28-year-old McAdoo resident was sentenced Thursday at the federal courthouse in Scranton. Federal prosecutors this week had filed a sentencing memorandum asking for a 262 to 327-month prison term.