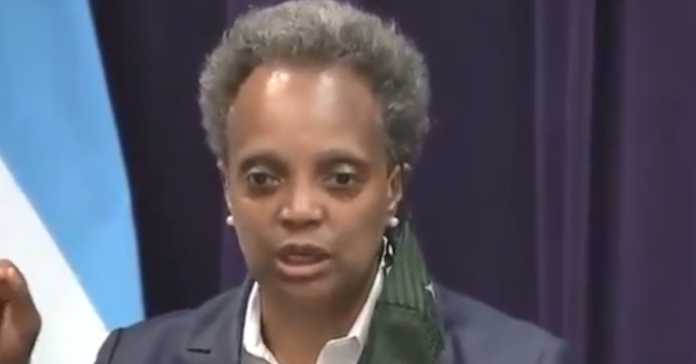 Chicago Mayor Lori Lightfoot got caught using profanity on a hot mic at a City Council meeting and this is not the first time she has been busted on a hot mic.

At one of Lightfoot’s first council meetings, she got busted saying not nice things about the second-vice-president of the Fraternal Order of Police, Patrick Murray.

When Murray rose during the public comment session Lightfoot was heard on a live microphone saying about Murray: “Back again. This FOP clown.” Lightfoot later kind of apologized saying she was “sorry that I said that out loud” but refused to apologize for what she said.

Which brings us to yesterday. As Ald. Rossana Rodriguez Sanchez finished speaking on a resolution commemorating Black History Month, Lightfoot was busted saying, “You’ve got to be f**king kidding me.”

“Sorry to disappoint the Twitter trolls, but my comment had nothing to do with anything that was actually going on at City Council. I’ve explained that to Alderman Rodriguez Sanchez and she understands that,” the mayor told reporters later.

Sanchez added, “It wasn’t an apology. It was a clarification. She texted me to clarify that what was said was not said in reference to what I said.”

“I’m going to take her words as the truth and I’m gonna move on.”

Not so fast said a Sun-Times reporter, who hinted there was more to the story and that this could blow up and sink Lori’s re-election.

“I talked about being grateful for the contributions of Black people in the United States and city of Chicago. And I said we had a responsibility to make this city a better place for all. That’s the last thing you can hear in the video being circulated.”

The Sun-Times reporter asked if Lori was not telling the truth with her explanation for using the profanity, “given historic tensions between Blacks and Hispanics in Chicago.”

“Ummm, I have no idea what the mayor was thinking. But I would not want to believe that was the case. I don’t think that there is any reason for her to talk that way about any comments that I made today,” Sanchez said.

“I’m pretty sure she was probably talking about something else and didn’t mute her microphone. I am pretty confident that there was no reason. I didn’t say anything in my speech that would prompt not only the mayor, but anybody, to say something like that.”