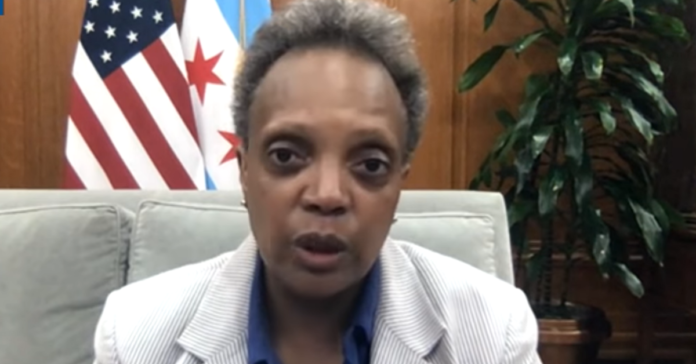 Forty-five people were shot, five fatally, across Chicago as the city erupted in violence on the first hot summer weekend police said. Another two people were killed in stabbings as embattled Mayor Lori Lightfoot struggles to control the city.

Last weekend the city saw twenty-four people shot, three fatally. Last Wednesday alone the city saw three people shot with one death. That man was shot in the chest about 8:45 p.m. while he sat in a parked vehicle with a friend Chicago police said. His friend drove him to the hospital where he was pronounced dead,

From ABC7: In the weekend’s latest fatal attack, a teenage boy was shot Sunday while driving in West Garfield Park on the West Side. The boy, 17, was shot in the face by someone on the sidewalk about 3 p.m. as he drove in the 4800 block of West Ferdinand Street, Chicago police said.

Earlier Sunday, two men were shot, one fatally, in Humboldt Park on the West Side.

The men were outside about 2 p.m. in the 800 block of North Ridgeway Avenue when someone walked up and fired shots at them, police said.

One man, 34, was struck in the shoulder and leg and taken to Mt. Sinai Hospital, where he died, police said. The other man, 40, was in good condition with gunshot wounds to the arm and abdomen.

One man was killed and another critically wounded in a shooting Saturday in Englewood on the South Side.

Just before midnight, the men, 27 and 30, were outside in the 5600 block of South Morgan Street when they heard shots and felt pain, police said.

The 27-year-old suffered gunshot wounds to the hip, shoulder and buttocks, police said. He was taken to St. Bernard Hospital where he was pronounced dead, according to police. The Cook County medical examiner’s office identified him as Benjamin Dawkins.

The 30-year-old man was struck multiple times in the shoulder and taken to the same hospital in critical condition, police said.

Sunday morning, a 21-year-old man was fatally shot while riding in a vehicle in Burnside on the South Side.

The man was sitting in the front passenger seat of a vehicle about 11:15 p.m. traveling in the 800-block of East 87th Place when someone fired shots in his direction, police said.

On 20 May 2019, the freshly elected Chicago mayor, Lori Lightfoot, delivered her inauguration speech to a jubilant audience.

It was imbued with promises of fundamental change – tailored care for blighted neighborhoods, solutions to government corruption and endemic violent crime, an ambitious agenda for tackling deep-rooted faults in the city.

She pledged to reform the Chicago police department, promising to “continue the hard but essential work of forging partnerships between police officers and the community premised on mutual respect, accountability and a recognition that the destinies of police and community are inextricably intertwined”.

Police reform seemed like a perfect task for Lightfoot given one of her prior roles of leading the city’s special taskforce on police accountability and reform.

She issued a scathing report on the department in 2016, addressing broken trust between police and community and noting: “A painful but necessary reckoning is upon us.”

It urged sweeping change and backed a “widely held belief the police have no regard for the sanctity of life when it comes to people of color”.

But sweeping change awaits. Almost two years into office, Lightfoot is under fire, accused of back-pedaling on accountability and reform while botching some high-profile cases involving police killing or misconduct.