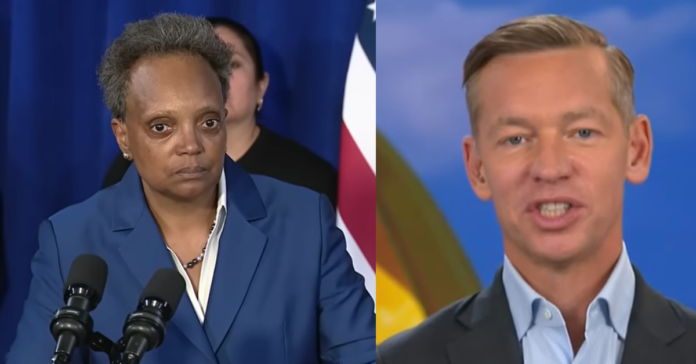 McDonald’s Chief Executive Officer Chris Kempczinski warned Chicago Mayor Lori Lightfoot that rising crime was causing him problems and that if not addressed could lead to Chicago’s demise.

He told Lightfoot he can’t get executives to move to the city because of the rising crime. Chris is not alone in this and many other corporate leaders have issued similar warnings. Chris said:

“Everywhere I go, I’m confronted by the same question. ‘What’s going on in Chicago?’ There is a general sense out there that our city is in crisis. The truth is, it’s more difficult today for me to convince a McDonald’s executive to relocate to Chicago from one of our other offices than it was just a few years ago.

“It’s more difficult for me to recruit a new employee to McDonald’s to join us in Chicago than it was in the past.”

“We see every single day in our restaurants what’s happening at society at large.

“It’s not going to be something that McDonald’s can solve on its own.

“We need to be able to do it with the public sector as well.”

“That’s one of the things about McDonald’s.

“Whatever’s happening in society, good or bad, you can be sure it’s happening at McDonald’s.”

He said he is not moving the headquarters, yet, but implored Lightfoot to make a plan and execute it, “Let us know the plan so we can support it. It’s going to take partnership.”

Enter the worst mayor in American history, Chicago’s Lori Lightfoot who actually said when asked to respond to Kempczinski:

“What would have been helpful is for the McDonald’s CEO to educate himself before he spoke.”

Lori is clearly out of answers and will soon she will be out of a job.

After McDonald’s CEO says Chicago needs to ‘face facts’ about its ‘crisis,’ Mayor Lightfoot says he should ‘educate himself’ before speaking https://t.co/M2FMD1C59v

According to The Wall Street Journal:

A number of major companies, including Boeing Co. BA 0.68%▲ and hedge-fund firm Citadel LLC, have announced this year that they will move their headquarters out of Chicago.

Citadel head Ken Griffin said he decided to move Citadel from Chicago to Miami for a better corporate environment, and company officials said crime was also a consideration.

Boeing said in May that moving its headquarters from Chicago to the Washington, D.C., area would bring the aerospace company closer to customers and engineering workers. Kellogg Co. said in June that it would move its global snacking business to Chicago as part of its decision to separate its business into three companies.

Four years after McDonald's headquarters moved to Chicago, the company's CEO says he's NOT lovin' it.

“There is a general sense out there that our city is in crisis.”https://t.co/cCGpIwNGy7

Nikki Haley Shuts Down Co-Host of The View: “What’s sad is the left’s hypocrisy towards conservative minorities, by the way, last I checked Sunny...