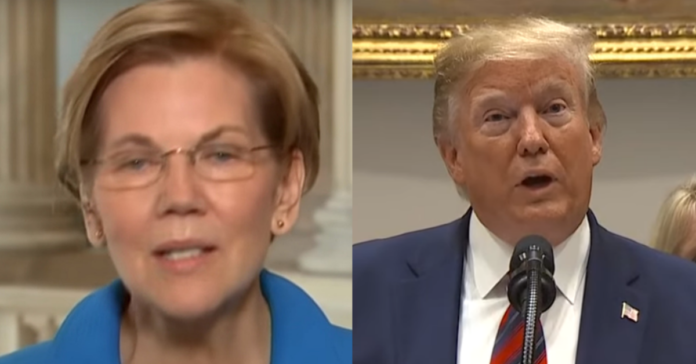 Liz Warren is desperate to revive her flailing campaign. So she is throwing out red meat to the base. The problem with that strategy is it leaves you vulnerable in the general election.

But it is even worse if you alienate half of your own party and every independent with your nonsense to give same-sex couple reparations.

I don’t see how she survives this as a credible candidate. Look, the Democrats are famous for snatching defeat from the jaws of victory and if they keep this up they are going to do it again. From PJ Media:

True to form on the intersectionality front, Sen. Elizabeth Warren (D-Mass.), a candidate for the 2020 Democratic presidential nomination, introduced a bill to extend the idea of reparations to LGBT people. While far more limited in scope than frequent calls for slavery reparations to black Americans, the proposal blames the U.S. government for withholding benefits same-sex couples allegedly should have received before the Supreme Court legalized same-sex marriage in Obergefell v. Hodges (2015).

On Friday, Warren re-introduced S. 1940, the Refund Equality Act, which would allow same-sex couples to amend past tax returns. According to a report from the Joint Committee on Taxation, the bill would direct $57 million in refunds. The funds would go to same-sex couples in states that had legalized same-sex marriage before the repeal of the Defense of Marriage Act in 2013. Warren introduced an earlier version of the bill in 2017.

“The federal government forced legally married same-sex couples in Massachusetts to file as individuals and pay more in taxes for almost a decade,” Warren said in a statement on the legislation. “We need to call out that discrimination and to make it right — Congress should pass the Refund Equality Act immediately.”

“It wasn’t until marriage equality became law that gay & lesbian couples could jointly file tax returns—so they paid more in taxes,” Warren tweeted Saturday. “Our government owes them more than $50M for the years our discriminatory tax code left them out. We must right these wrongs.”

Warren’s bill for same-sex marriage reparations is far more straightforward and is limited to couples in states that had legalized same-sex marriage before the federal government did. Even so, it relies on the claim that the federal government’s definition of marriage as between one man and one woman was wrong before 2015. If so, why not extend the reparations back even further?

This bill champions a new grievance. It is not enough that same-sex couples now have the right to marry under federal law. No, they must be retroactively given the right to file taxes according to that theory.

If this law passes, what will they demand next? Already, activists and politicians seek to punish Christian artists who refuse to celebrate same-sex marriage or transgender identity. Will the next reparations push demand that these alleged bigots pay LGBT people to balance the cosmic scales of justice?