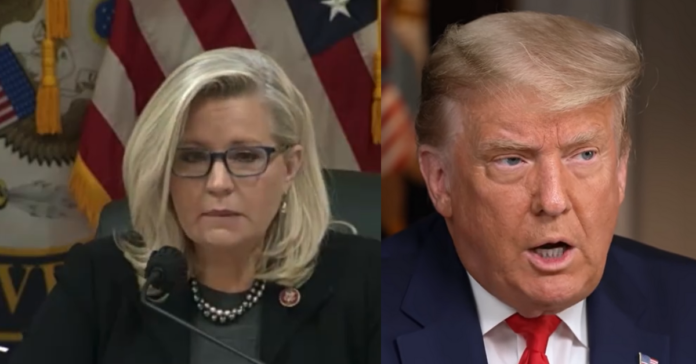 Wyoming Republican Rep. Liz Cheney, vice chairwoman of the House select committee looking into Jan. 6, issued a threat to former President Donald Trump over his desire to debate members of the committee.

Cheney said: “President Trump continues to make the same false claims about a stolen election, with which he has misled millions of Americans.

“These are the same claims he knows provoked violence in the past. He has recently suggested that he wants to debate members of this committee.

“This committee’s investigation into the violent assault on our Capitol on Jan. 6 is not a game. “When this committee convenes hearings, witnesses will be called to testify under oath.

“Any communication Mr. Trump has with this committee will be under oath.

“And if he persists in lying then, he will be accountable under the laws of this great nation and subject to criminal penalties for every false word he speaks.”

It did so despite Clark, shortly before the Wednesday committee vote, agreeing to appear before the committee for another deposition on Saturday.

Clark’s lawyer had also told the committee at about 8 p.m. Tuesday that he planned to assert his Fifth Amendment rights against incriminating himself.

Whether the whole House takes the matter up for a vote and holds Clark in contempt of Congress will depend on how the deposition goes on Saturday.

“We have just learned that Mr. Clark has agreed to appear again to continue his deposition. However, we will proceed tonight with considering the contempt request, as this is just the first step of the contempt process,” said committee Chairman Bennie Thompson, a Mississippi Democrat.

“We just want the facts, and we need witnesses to cooperate with the legal obligation and provide us with information about what led to the Jan. 6 attack. Mr. Clark still has that opportunity and I hope he takes advantage of it.

But we will not allow anyone to run out the clock and we will insist that he must appear on this Saturday.”

Cheney:Trump has recently suggested that he wants to debate members of this committee. Any communications Mr. Trump has with this committee will be under oath and if he persists in lying then, he will accountable.. and subject to criminal penalties for every false word he speaks pic.twitter.com/fO169OS5lX