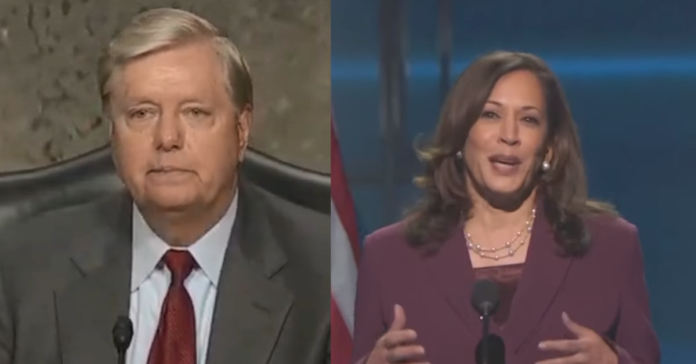 South Carolina Senator Lindsey Graham warned Democratic lawmakers about Trump’s upcoming impeachment trial saying he may try to turn the focus to Kamala Harris if they go too far: “Be careful what you wish for,” he said.

“If you’re going to pursue this, and you wanna start calling witnesses, and you want to drag this thing out, it would be fair to have Kamala Harris’ tape play where she bailed people out of jail,” he said. He may have been referring to a tweet she sent out you can see below.

“If there’s an effort by the Democrats to call a single witness in the United States Senate, they had no record in the House, there will be a delay of this trial, there will be a Pandora’s box being opened,” Graham said earlier. “We will want witnesses and this thing will go on for weeks if not months.”

What Mr Graham may be referring to is a 1 June 2020 tweet from then-Senator Harris where she encouraged people to “chip in now to the Minnesota Freedom Fund to help post bail for those protesting on the ground in Minnesota,” during the racial justice protests last summer.

According to The Washington Post’s “Fact Checker”, it was “wrong to suggest that the donations led to the release of many protesters or rioters”.

Mr Graham has previously said on Fox News that “If there’s an effort by the Democrats to call a single witness in the United States Senate… there will be delay of this trial, there will be a Pandora’s box being opened. We will want witnesses and this thing will go on for weeks if not months”.

The 65-year-old South Carolina Republican has also stated that if even one witness is called, “we’ll want the FBI to come in”.

This led to “Bring in the FBI” trending on Twitter as some of those who are in favour of Mr Trump’s conviction argued it would only help their case to have the Bureau take part in the proceedings.

If you’re able to, chip in now to the @MNFreedomFund to help post bail for those protesting on the ground in Minnesota. https://t.co/t8LXowKIbw