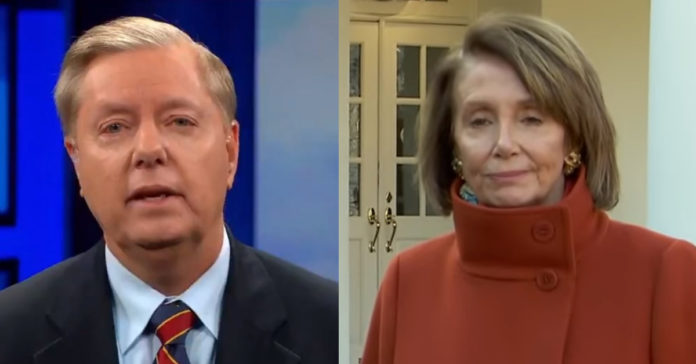 Hypocrites and frauds will be how the Democrats will go down in history after another shameful display of arrogance in front of a stunned nation.

Lindsey Graham is calling out the left for their shameful display and they deserve it. America hates it when our politicians make national security a stunt.

This must be above the fray as Lindsey made abundantly clear in an explosive interview with Fox News’ Martha MacCallum where he dug up some skeletons from Chuck and nancy’s closets and exposed them so the American people can decide.

So they’re just — they want Trump to lose more than they want the country to win. They voted for vast — large amounts of money to secure the border before, they just don’t want to do it for Trump.

MACCALLUM: There’s a suggestion that $5 billion wall funding bill could pass the house in the coming days, and we’re going to see what happens with that.

Nancy Pelosi wants to be speaker, she needs 218 votes. She clearly feels like backing any solution in this is going to make that problematic for her, right?

GRAHAM: She’s got a political problem the country has some border security problem. Here’s what I would tell the president, if they voted for $25 billion in February of this year — insist on $5 billion now.

The caravans have created more uncertainty on the border, not less. What signal are we sending to the world if we reduce funding for border security in light of increased threats? We’re inviting more caravans.

So the president is right, this liberal arrogance has to come to an end. Nancy Pelosi said, “I will never put DACA associated with the wall.” Well we did that in February. So this idea that the president needs to back down, doesn’t make sense to me — he needs to dig in and get the very democrats who voted for $25 billion to give him $5 billion because we need the money now more than ever.

MACCALLUM: Yeah, I mean, when you talk about compassion and there’s all of this concern for the people who are trying to get in to this country on the part of democrats — and then the president offered $1.8 million DACA recipients (ph) which was bigger than the number that they initially wanted. And they turned that deal down.

Again, in 2013 democrats had an $8 billion wall plan. In February 2018 they all voted for $25 billion for wall and border security. This is all about politics, the president needs to dig in and make them pay a price — they’re overplaying their hand. If I were the president I would put DACA on the table and see if they say no to that, wall plus DACA would be a good deal for this country.

Again, in February, 44 democrats voted for $25 billion. It’s not the money, it’s the desire to have Trump fail. And he needs to deal with it now, it’s only going to get worse next year — he’s in a good spot, dig in, make the case that this money is necessary and challenge the democrats to work with you on DACA, plus the wall. And if they say no to that, that means they really do hate Trump more than they care about the country and that will blow up in their face.

He’s got to deal with this obstruction now — this hypocrisy now, this liberal arrogance now.

The president needs to make the case, he’s being reasonable and they hate him so much they want him to lose and the country to lose. So I mean, at the end of the day they’d rather him lose than the country win. Stick with it Mr. President, you’re on the right side of this issue. You will win this case for the American people. “

Graham felt he had no choice but to ruthlessly expose the left’s hypocrisy after Chuck and Nancy played the worst kind of politics yesterday.

From Politico: Minutes after a very public showdown with Donald Trump over his border wall with Mexico, the California Democrat returned to the Capitol and railed against the president in a private meeting with her colleagues.

Trump “must have said the word ‘wall’ 30 times,” the House minority leader said, according to multiple sources in the room.

“I was trying to be the mom,” she added, but “it goes to show you: You get into a tinkle contest with a skunk, you get tinkle all over you.”

And then, Pelosi went for the most sensitive part of Trump’s ego.

“It’s like a manhood thing with him — as if manhood can be associated with him,” she deadpanned. “This wall thing.”

From The Hill: President Trump on Tuesday engaged in an extraordinary argument with Democratic congressional leaders over his demand for border-wall funding, threatening a government shutdown if he does not get the money.

During the contentious meeting in the Oval Office, Pelosi (D-Calif.) repeatedly asked Trump not to discuss the funding request in front of the news media.

“You will not win,” Pelosi told Trump.