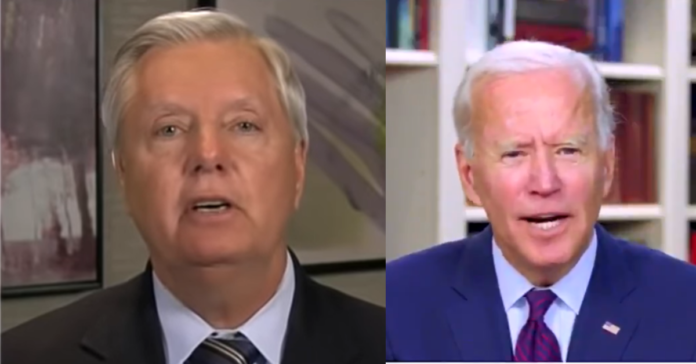 On Tuesday’s broadcast of Fox News Radio’s “Brian Kilmeade Show,” Sen. Lindsey Graham (R-SC) called for a total shut down of America’s immigration system until we figure out what in the heck is going on at our southern border.

Graham said, “There was a time that we basically shut down travel into the United States from China and other places. I think it’s now time to shut down the immigration system and have a timeout. What they’ve done by abolishing the remain in Mexico policy, people are released into the interior of the United States.

Graham introduced the Secure and Protect Act of 2021 last month to try to fix our system. Graham said at the time:

“Most asylum seekers are not coming because of fear, but because of economic distress. The asylum standard has been completely abused. It is being used by cartels and human traffickers, and they’re telling these poor folks all over Central America, ‘once you get to America, claim asylum.

“You’re entitled to a hearing, they will release in the United States, then you can go anywhere you want to go.’ 90% of the people never show up for the hearing, and 90% of those who do show up are not allowed asylum.

“The asylum system is being gamed. The Secure and Protect Act will stop this.

“I am convinced if this bill became law and we had a three-year timeout in accepting claims inside the United States, making sure people apply outside the country in their home country or some international refugee center that we can set up in Mexico or someplace else, that this flow will stop literally overnight. If we don’t do that, the worst is yet to come.

“The Democratic Party has to admit that Trump’s not the problem here, they are.

“The Biden Administration, by giving an exception to unaccompanied minors from being deported under Title 42, has created a flow problem that we haven’t seen before because word is out in Central America, if an unaccompanied minor gets to the United States, they’re not going to be sent back.

“Can you imagine what would happen if Congress actually passed the DREAM Act without addressing the underlying problems at the border?

“There would be a run on our border like you’ve never seen before.

“If it got out that, hey, a million people just got legal status who’ve been here for decades, don’t you think people throughout the world, particularly the Northern Triangle, would take that as an incentive to come?

“So we cannot possibly pass any legalization legislation until we regain control of the border,” he added.

My letter to Dr. Fauci urging him to travel to the U.S.-Mexico border to survey what many consider to be a public health crisis related to the surge of migration from Central America. pic.twitter.com/mXDQsYufd7

We will not stand for it in South Carolina. https://t.co/nMQGrpz5S4