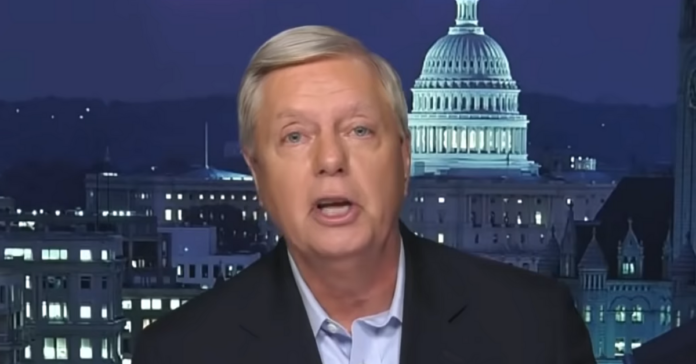 Sen. Lindsey Graham (R-S.C.) ripped a proposal from Democrats to insert a provision that would grant amnesty to undocumented immigrants into the already contentious infrastructure spending proposal currently getting lukewarm support in Congress.

Nancy Pelosi and the Dems are given to passing show bills that will never pass but allow candidates to pretend they did something to their constituents. “If you give one person legal status there will be a run on our border like you have never seen before,” Graham said Monday on Fox News.

Democratic House members wrote a letter to the Chairs of the House and Senate Committee on the Budget telling them to include immigration reform as part of the budget resolution.

“As you develop the budget resolution for fiscal year 2022, we urge you to include bold reforms to our immigration system so that it meets the needs of the American people now and prepares us for a vibrant and economically prosperous future,” the Democratic House members wrote.

“While we continue to build broad support for the U.S. Citizenship Act, we stand ready to work with you to pass immigration reforms through the budget reconciliation process,” they added.

Republicans have been trying to raise the alarm about what they say is an effort by Democrats to sneak amnesty for millions in a bill that is ostensibly intended to fix potholes. Rep. Steve Scalise, R-La., tweeted last week, “Democrats are trying to sneak mass amnesty for millions of illegal immigrants through Congress under the cover of their budget scheme. They hope you won’t notice.”

KQED, a public radio station for the Bay Area, reported that top Senate Democrats have made it clear that they want immigration reform as part of the budget plan because they consider immigration part of the infrastructure.

Sen. Alex Padilla, D-Calif., was quoted in the report, saying, “Citizenship is essential infrastructure for immigrant families. For many, it’s a gateway to a driver’s license, to health care, to higher education.”

The report said that he hopes the spending bill will provide citizenship to Dreamers, essential workers and other undocumented individuals.

RUBIO: “Every elected Democrat understands very well that Americans do not want an amnesty bill, which is why they are trying to sneak it into what will be thousands of pages of text, which no one has seen, and ram it through with zero Republican votes.” https://t.co/cna0GN1UHm

It will lead to the breakdown of law & order beyond what you see today.https://t.co/PJtPlmeiip