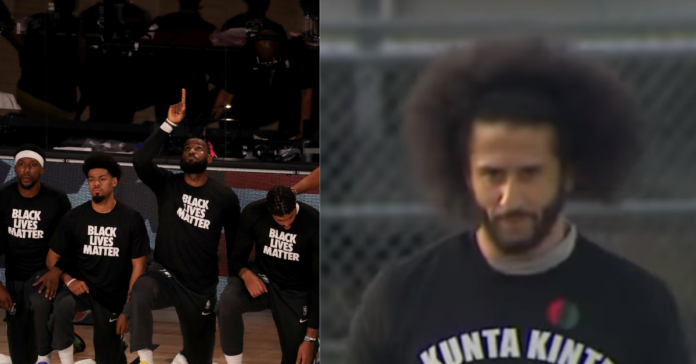 LeBron James took a knee last night and added a special message to his act of defiance – a shout-out to former NFL player Colin Kaepernick.

“I just don’t think at that point in time I wasn’t fully educated,” James said of why he is taking a knee now. “Strengthening the mind, reading, listening, getting as educated as I can be on any situation, on anything that’s going on. I’ve been always who I am. And until I’m fully educated and I’m fully aware of what’s going on, then I call for action. I feel like at that time I wasn’t fully educated on the purpose, what is the purpose at hand. And honestly, Kaep has taught me a lot about that.”

“I hope we made Kaep proud. I hope we continue to make Kaep proud every single day. I hope I make him proud with how I live my life, not only on the basketball floor but off the floor,” James added.

As he knelt down and locked arms during the national anthem Thursday night, Los Angeles Lakers star LeBron James did not just protest systemic racism. He also wanted to send a message to former NFL quarterback Colin Kaepernick.

“I hope we made Kaep proud. I hope we continue to make Kaep proud every single day. I hope I make him proud with how I live my life, not only on the basketball floor but off the floor,” James said after the Lakers’ 103-101 win over the Clippers Thursday.

“I’ve been one to always speak out about things that I feel like is unjust. If I’m educated on things, I always go about it that way. So Kaep was someone who stood up when times weren’t comfortable, and people didn’t understand or refused to listen to what he was saying.”

“He explained that and the ears were uncomfortable. People never listened. They refused to listen and I did.”

James may have listened, but he did not immediately follow through with Kaepernick’s actions.

When some NFL players followed Kaepernick’s gesture in 2017, James resisted. The reason?

James told reporters, “my voice and what I do in my community is more powerful than getting on a knee.”

All players, coaches and refs take a knee and lock arms during the national anthem before the Lakers-Clippers game. pic.twitter.com/eZ9RHE3eh7

“We’re dealing with a lot of racism, a lot of social injustice, a lot of police brutality … We cannot stop with our foot on the gas …”

—LeBron on the NBA’s fight for social justice as all players kneel at restart of season #BLM pic.twitter.com/sFM2qK6BRi