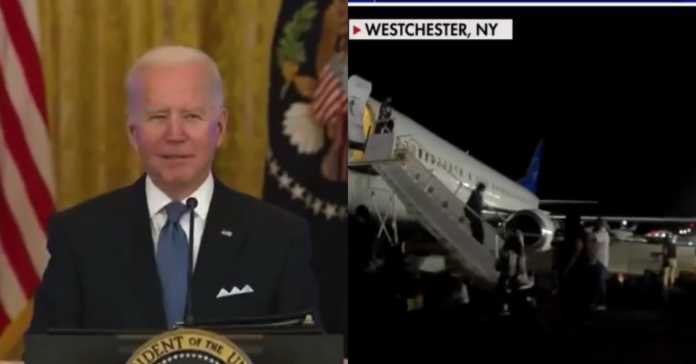 Tucker Carlson got his hands on a leaked video that will further sink President Joe Biden and Vice President Kamala Harris’ approval ratings. The video shows migrants being transported on secret charter flights to Westchester, New York in the dead of night,

But it gets worse for Joe Biden. A federal contractor can be heard telling a Westchester County police officer (in a conversation recorded on the officer’s body camera at the airport), “The government is betraying the American people.”

The footage was obtained by former Westchester County Executive Rob Astorino. He is running for governor of New York. He told Tucker Carlson: “Our government is completely out of control right now. They have lied to us. They’ve lied to the American people.

“They’re being put into schools in Westchester, Long Island, the surrounding suburbs. So it is a complete breakdown of our system. It is a betrayal, as that gentleman said, a betrayal to the American people.”

EXCLUSIVE FOOTAGE: Government contractors admit to flying illegal immigrants to smaller airports to keep the flights on the "down low" and hidden from the public. pic.twitter.com/BXA0NHr6Ue

In the video of the August incident, Westchester Police Sgt. Michael Hamborsky is talking to federal contractors early in the morning about the after-hours flights and why local police were kept in the dark.

“You’re on a secure facility here; we really don’t know anything and we’re in charge of security,” he told one of the contractors.

“This is anti all our security stuff,” Hamborsky said.

“I’m just trying to figure out what’s what, who’s who and how I’m supposed to keep this secure,” Hamborsky said.

“We’re not allowed to have our picture taken when we get on base,” a contractor said.

Contractor: “Yes, and the United States Army. You’re on a federal installation but DHS wants everything on the down low.

“You don’t want to be in somewhere the spotlight is.

“You want to try and be as down low as possible. A lot of this is just down-low stuff that we don’t tell people because what we don’t want to do is attract attention.

“We don’t want the media. Like we don’t even know where we’re going when they tell us.

“And why? You know why?” Hamborsky said..

“You know why, look who’s in office. That’s why, come on,” the contractor said.

“You know why. Because if this gets out, the government is betraying the American people,” the contractor said.