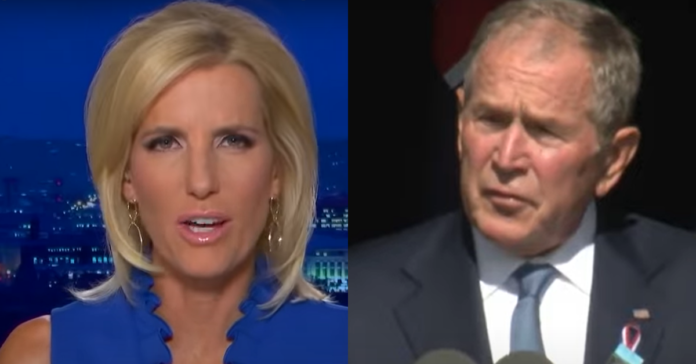 Laura Ingraham spilled some Bush family and White House secrets after George W Bush’s speech at a 9/11 memorial rubbed her the wrong way. She revealed how the Bushes cut her off after she went against one of George W’s SCOTUS picks and how the “old Bush guard has declared an unwinnable war again, and this time it’s against the 74-million-plus Republicans who voted for Trump in 2020.”

“Why would Biden need to speak at all when George W. Bush would do it for him?” she said.

“We have seen growing evidence that the dangers to our country can do not only across borders, but from violence that gathers within. There is little cultural overlap between violent extremists abroad and violent extremists at home. But there is disdainful pluralism in their disregard for human life, in their determination to defile national symbols. They are children of the same foul spirit and it is our continuing duty to confront them,” Bush said Saturday.

“Do you remember seeing him speak out about any of that?” Laura asked about the BLM and antifa riots.

She continued: “When they screamed that America is “inherently racist” did he raise an objection?

“When they tried to burn down Saint John’s Church across from the White House did President Bush decry the defiling of “national symbols”? No and No.

“Of course, the elites who despised Bush for the 8 years he was in office lapped it up.

“Bush and Obama have coordinated before in hitting Trump. One day in October 2017, both men in separate speeches hit Trump without mentioning him by name of course.

“But when Donald Trump began to slowly but surely call out and dismantle Bush’s globalist legacy, he couldn’t stop himself.

“Let’s not kid ourselves, the Bushes helped raise 150 million dollars for Jeb’s 2016 run, and in the end, Jeb dropped out before getting to his own home state primary.

“And they still don’t get it.

“They’re not mad at the people who called him a war criminal or Hitler or who ridiculed him every week on Saturday Night Live.

“They’re mad at the Republicans who rejected their policies.

“They all claimed that Trump was the devil incarnate for demanding loyalty of the people who worked for him, but the truth is, the Bushes were the ones who demanded personal loyalty regardless of how their policies affected the country.”

“This is all hard for me to say tonight, because I always liked the Bushes personally.

“When I questioned and ultimately helped torpedo his nomination of the supremely unqualified Harriet Miers to the Supreme Court, the Bush White House made it clear they wouldn’t ever deal with me again.

“You can never go against the Family.

“So the Old Bush Guard has declared an unwinnable war again, and this time it’s against the 74-million-plus Republicans who voted for Trump in 2020, and who didn’t vote for Jeb in 2016.

“The fact is, most conservatives long ago shook off the allure of the Bushes.  We found new leaders – including exciting young governors — who will fight for us instead of against us, and we won’t be fooled again,” she said.

When Republicans align with the for Left to attack conservatives and their views, They are the heroes du jour. perspectives from ⁦@newtgingrich⁩ ⁦@RaymondArroyo⁩ ⁦@ByronYork⁩ 10pET pic.twitter.com/ELdNLYd1bU