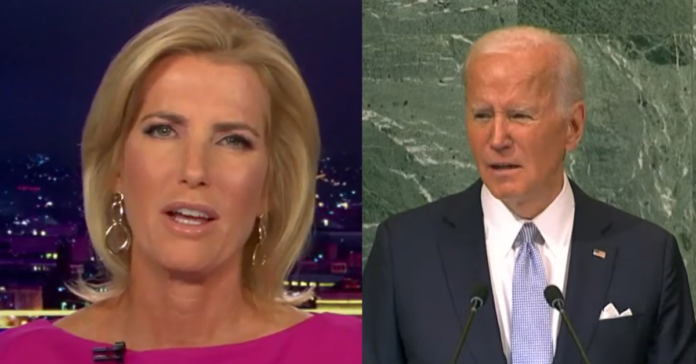 Laura Ingraham issued a warning to President Joe Biden and all the other politicians in this great country while scolding them for selling us out to China. Laura said:

“As the regime media obsess over the left’s latest anti-Trump crusade, they’re failing to report on what really matters to you and your family. Now, would you be shocked to learn that many of our top-elected officials and leading corporate CEOs are working right now to undermine America and to protect China?

“Take the banking sector, for example. It was just years ago when the bigwigs of Wall Street decided to fall in line behind Black Lives Matter, remember, and Al Sharpton, all that?

“That was after George Floyd’s death that they railed against American racism and social media posts, and then they went on to commit billions to promote racial justice.

“Ended up being, in large case, a giveaway to racial hucksters coast-to-coast.

“But when pressed in congressional hearings this week on Chinese abuses?

Now, these same banks, they didn’t have any problem speaking out against Georgia’s completely reasonable voter integrity measures, did they?

“The Titans at companies like Coca-Cola and Microsoft, a lot more, decried the treatment of minorities in America even as they were and are raking in billions in China — a regime that tortures its dissidents and uses slave labor.

“Although the bank CEOs are total hypocrites on their virtue signaling.

“Of course, they are right.

“ It was the U.S. government policy going back to 2000 that first encouraged businesses to offshore a lot of their manufacturing to China and the banks.

“Politicians in both parties and Fortune 500 CEOs here have in turn helped make the communist nation very rich and very powerful.

“China is now, thanks in great measure to them, our greatest geopolitical threat,” she said.

“Democrats have literally nothing positive that they can be talking about.” — @pnjaban exposes how the Dems are distracting from the real issues. Subscribe to @QuakeMedia to listen: https://t.co/k2zVoMLkqP pic.twitter.com/1h5DQhK9kh