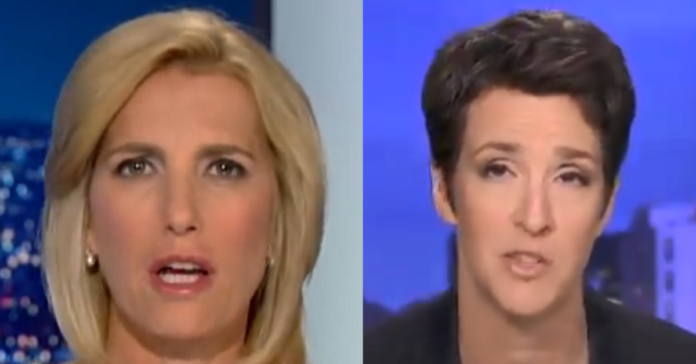 “I am so proud to be working with this Ingraham Angle team of talented producers, technical directors, and editors,” Ingraham told the Washington Examiner about her ratings rise and Maddow’s fall.

“We are all grateful to our sponsors and our loyal viewers, who trust us to analyze our politics and culture during these challenging and exciting times. What we’ve been able to do at 10 o’clock is truly remarkable, and the record ratings are humbling,” she said.

The host of The Ingraham Angle at 10 p.m. on weeknights since October 2017 has experienced a large boost in ratings in 2020, and it has propelled her past other female hosts, including MSNBC’s Rachel Maddow, who had been the most-watched.

In every month since December 2019, Ingraham has beaten Maddow in nightly audience size, according to Nielsen Media Research. Additionally, in that same time frame, Ingraham’s monthly ratings never dropped below 3 million viewers a night, which is a marker she had never topped prior to this stretch.

Ingraham similarly topped Maddow in the key 25-54 age demographic, which is coveted by advertisers, during the same time.

Ingraham, a conservative, espouses opinions that are usually opposed to those of Maddow, a liberal who often dediicates her show to criticizing President Trump and his administration.

Maddow’s nightly audiences beat out those drawn in by Ingraham for much of 2017-2019, which covered a period that included the Trump-Russia investigation and the Trump impeachment fight.

But Ingraham’s ratings have skyrocketed this year, as have the other prime-time hosts at Fox News.

The divide between Ingraham and Maddow was particularly prominent in the first three months of the year when Ingraham eclipsed 3 million nightly viewers, but Maddow never did.

The MSNBC host has since bounced back with average audience sizes ranging from 3.01 million-3.3 million viewers but still trails.

Ingraham beat out Maddow in July by less than 100,000 average viewers, which is the closest Maddow has been to Ingraham since she last led the Fox News host in November.