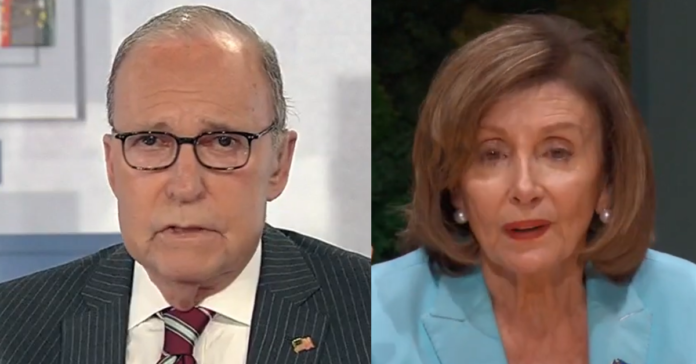 Fox News host Larry Kudlow told Speaker Nancy Pelosi that despite spending hundreds of millions of dollars on negative campaign ads aimed at Republican candidates she will be out of a job after the midterms.

Kudlow looked at some recent poll numbers to make his prediction. He said: “An ABC News/Washington Post poll of registered voters shows that Republicans are 21 points up against Democrats in battleground districts across the country. That’s right, 21 points and these aren’t even likely voters. They are registered voters and many key pollsters think Republican voters don’t even want to answer polling surveys because the FBI might take their cellphones away.

“Looking at just races rated at least somewhat competitive by ABC’s FiveThirtyEight model, voters favor GOP candidates 55% to 34%. Overall, by the way, the likely voter subheading showed a 51-46 Republican-Democratic split and here’s the actual most important key message in this poll.

“On the economy, the GOP is plus-16, on inflation plus-19, and on crime plus-14. Democrats have a plus-6 for education and schools, although frankly I don’t see how that’s possible with the growing populist support for parental rights in their kids’ education.

“Historically, when a president’s approval is less than 50% (and Joe Biden is way below that. Actually, 42% in the latest Rasmussen poll) his party has lost an average of 37 seats.

“These numbers put an even greater importance on the “Commitment to America” developed by Kevin McCarthy and House Republicans. Mr. McCarthy will be here in just a moment.

“The “Commitment to America” lays out a roadmap that emphasizes lower federal spending to fight inflation, tax cuts and deregulation to grow the economy out of recession and energy independence to increase fossil fracking permits, reduce reliance on foreign countries and lower blackouts and gas and electricity costs.

“Under Biden’s radical war against fossil fuels, electricity has increased 22% and utilities and piped gas services 47%.

“Roughly 20 million households are behind on utility bills. 26% of Americans have been forced to reduce basic expenses like food and medicine in order to pay sky-rocketing energy bills.

“Also, in the “Commitment to America,” the roadmap emphasizes securing the border and combating illegal immigrants, reducing crime by hiring cops and cracking down on crazy, woke prosecutors and DAs who favor criminals over victims. There’s also a section on criminalizing all forms of the scourge of fentanyl.

“The “Commitment to America” supports the parents bill of rights, parental choice in schools and healthcare reform through transparency and competition.

“The roadmap aims to fight for free speech, protecting the lives of unborn children and their mothers, religious freedom and safeguarding the Second Amendment and there’s a strong commitment to rein in government abuse of power and corruption through tough resolutions of inquiry to guarantee proper oversight.

“The document messages to voters the GOP commitment to curb inflation, reinvigorate the economy, fight crime, back up parents and cops, close the border, reopen the energy spigots and defend freedom.

“Freedom is a word you never hear from Democrats but restoring freedom in all areas of American life is a very powerful undercurrent to this election.

“No matter how much Biden World Democrats try to avoid these crucial issues, or lie about them, the fact remains that Americans are a lot smarter than Biden’s big government socialists believe.

“Voters see right through the phony ads and statements from the Democrats. Yes folks, I truly believe the cavalry is coming,” he said.