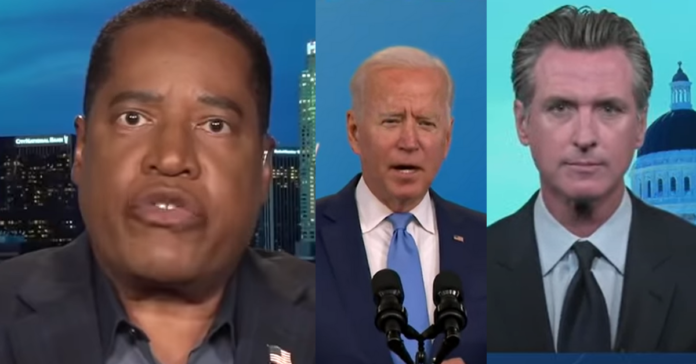 Embattled California Governor Gavin Newsom knows his political career could come to an ugly end as the recall looms. Newsom has angered enough Californians that even if this was a high turnout election he would have trouble.

But turnout will be low and that helps Larry Elder, the leading candidate to replace Newsom. Elder has momentum and he is going on the offensive after Biden’s debacle in Kabul sank Joe’s favorability rating in most polls.

Biden has been surprisingly absent from the campaign trail so Elder turned the screws daring Joe to come to California and campaign for Gavin because he knows it will backfire.

“I’ll believe it when I see Joe Biden come here. I’m not sure he’s going to. I understand he’s supposedly going to come here to campaign on behalf of Gavin Newsom. His popularity now is in the low forties — I think I saw 41%. Most Americans don’t even believe he’s home — that somebody else is in charge.

“So it’s going to backfire. But let him bring it in. Let him have him come in, and try to defend Gavin Newsom’s record on crime, and on homelessness, and on the outrageous cost of living, and on the way he ignored science and shut down the state to the point where a third of small businesses are gone forever.

“Let Joe Biden make that case for him. I want him to come here. Let him do it. And out of all the major political figures in America, Gavin Newsom’s one of the few who’s praised the way he handled the Afghan crisis.

“And it has been a disaster after a disaster, one of the worst foreign policy mistakes America has ever made.

“So if Joe Biden wants to come here and lend his presence to California, I welcome that opportunity. But I don’t believe he’s going to do it.

Biden did muster this post of support for Gavin a few weeks ago but otherwise he has not done much to help Gavin.

“Gov. @GavinNewsom is leading California through unprecedented crises—he’s a key partner in fighting the pandemic and helping build our economy back better. To keep him on the job, registered voters should vote no on the recall election by 9/14 and keep California moving forward.”

Kamala Harris, who is even more unpopular than Joe Biden, is scheduled to make a campaign visit for Newsom soon but no one thinks that will help. In Fact that visit alone may seal his fate.

– Polling shows Newsom is barely even.

Gavin Newsom’s political-media-tech machine is weaponizing against me because they feel their grip on California slipping away. Bogus “investigations”, negative Google search results, slanderous accusations, white supremacy (lol). They are desperate. We are winning.