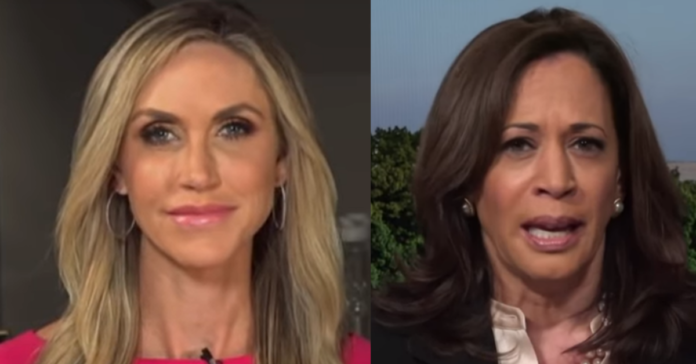 Lara Trump dropped the hammer on the hapless Kamala Harris on Fox News today. She said: “This is what happens when you have a border czar who is closing in on 80 days since she has been tasked with addressing this problem, has yet to go to the southern border. That interview was an absolute disaster. What an embarrassment. “I haven’t been to Europe.” Are you kidding me?

“What does that have to do with anything? And “we have been to the border” Who? Who has been to the border between Joe Biden and Kamala Harris, the two people apparently in charge of the country? It is a ridiculous thing.

“It’s hard to believe that this woman was actually a prosecutor. She had to know she was going to be asked these questions. Then she so nonchalantly kind of tries to brush it off.

“This is a crisis. We have seen that in a year we have a 674 percent increase in people coming over our southern border.

“There were 180,000 apprehensions last month alone. Those are the people they caught. Think about all the people that came in.

“You show videos all the time, people just walking across this southern border with nobody there to stop them. It is ridiculous. Obviously, it is embarrassing for America that this is our vice president,” she said.

Harris also got some bad news from the White House who leaked their ‘confusion’ over her botched interview.

CNN’s Jeremy Diamond reports that White House insiders were ‘perplexed’ and ‘not thrilled’ and ‘confused’ with her answers and that her own team was reportedly frustrated she botched the interview in the manner in which she did.

“The Vice President saw this trip as an opportunity to burnish her foreign policy credentials after entering office with very little foreign policy experience,” Diamond said. “She also hoped to make real progress on the root causes on migration from Central America.”

“There was certainly progress, but there are now concerns that some of that progress may have been overshadowed by her answers to some of these questions that her team knew that she would be facing,” he said.

“It’s left some of the administration officials perplexed, and the vice president’s team frustrated,” he added.

“Some administration officials are quietly perplexed about the Vice President’s answers to some questions, in particular the particular question she got from Lester Holt where she equated the question about the border with Europe,” he said.

“There was hope the trip would be a success, and in the end, they feel it may have been overshadowed by some of her answers to these questions,” Diamond said.