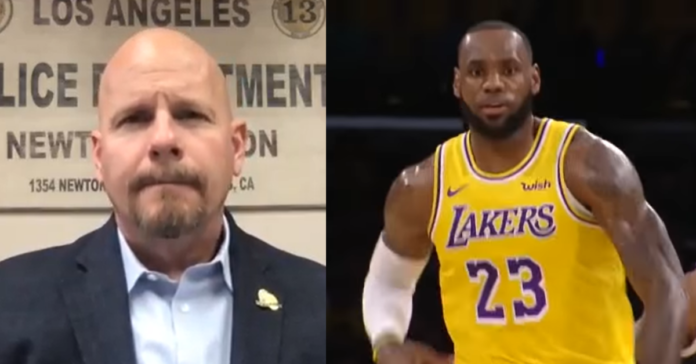 A member of the Los Angeles Police Protective League Board of Directors, detective Jamie McBride, just gave LeBron James some bad news. McBride confirmed on Fox News last night that his organization formally requested that the NBA launch an investigation into the Lakers star player.

McBride called out NBA player LeBron James for a tweet about the Columbus, Ohio officer involved in a shooting, before reminding James who provides his security and security to the NBA. He said off-duty cops provide security for LeBron and his family as well as to many in the NBA community.

McBride said he made his official request in a letter he sent to NBA commissioner Adam Silver asking the NBA to investigate whether James violated any league policies. “No officer wants to take a life, but I’ll tell you one thing, that officer saved a life and he’s a hero,” McBride said.

“One of the biggest hypocrites out there is LeBron James,” McBride added before detailing his proof.

“LeBron James has talked time and time again about police officers and how bad, they’re all killers. However, they’re also doing protection at his house.

“LeBron James sent that tweet out to over fifty million followers to incite violence is basically what that tweet did,” McBride said.

“Celebrities all throughout Los Angeles and LeBron James hire off-duty police officers who do security at their houses for him, but they won’t mention them in anything because obviously, they’re going to look bad to their followers,” he added.

“They’re trying to create this image of being a crusader and what they are is inciting violence,” he said.

An LAPD officer took to Facebook Sunday to write a lengthy letter to LeBron James hoping the two can sit down together and talk about the realities of policing https://t.co/hmCf0mpAsq

The police union that represents officers from the Los Angeles Police Department has sent a letter to the NBA asking the league to investigate LeBron James for his now-deleted tweet about the fatal police shooting of a 16-year-old Black girl in Columbus, Ohio.

Ma’Khia Bryant was shot and killed the same day that former Minneapolis police officer Derek Chauvin was convicted of murdering George Floyd, sparking immediate outrage. Bodycam footage from the incident shows that Officer Nicholas Reardon shot Bryant four times as she was swinging a knife at another girl during an altercation.

James’ initial tweet read “YOU’RE NEXT #Accountability,” along with an hourglass emoji and a picture of Reardon. Before that, James had tweeted “ACCOUNTABILITY” after Chauvin was found guilty.

Within a few hours, James deleted the tweet, later explaining that it was being used to spread more hate.