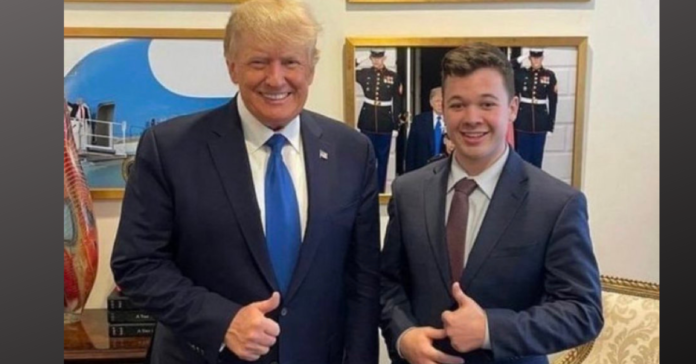 Kyle Rittenhouse met with former President Donald Trump at the Mar-a-Lago club after he was acquitted of all charges in his trial last week. Trump disclosed the meeting in an interview with Sean Hannity last night.

Trump said: “Kyle I got to know him a little bit. He called. He wanted to know if he could come over and say hello because he was a fan unlike the other guy. Really a nice young man. What he went through, he should’ve, that was prosecutorial misconduct. He should not have had to suffer through a trial for that.

“He was going to be dead. If he didn’t pull that trigger, that guy that put the gun to his head, in one quarter of a second, he was going to pull the trigger, Kyle would’ve been dead.

“Just left Mar-a-Lago a little while ago and he should never have been put through that. That was prosecutorial misconduct, and it’s happening all over the United States right now with the Democrats,” Trump said of Kyle.

“This is about a campaign video released last year that used President Trump’s own words during a debate as he refused to condemn White supremacists and militia groups.

“And President Trump, as we know from history, and as many of you covered, didn’t just refuse to condemn militia groups on the debate stage, he encouraged them throughout his presidency.

“So, you know, what we’ve seen are the tragic consequences of that – when people think it’s OK to take the law into their own hands instead of allowing law enforcement to do its job.

“And the president believes in condemning hatred, division and violence. That’s exactly what was done in that video.”

Kyle Rittenhouse and his mom visited with Trump at Mar-a-Lago, Trump revealed on Hannity tonight. pic.twitter.com/pSSw7Jbgwo

Trump "actively encouraged [militia groups] throughout his presidency … what we've seen are the tragic consequences of that."

That's Jen Psaki's response after Peter Doocy asked if @POTUS would apologize to Kyle Rittenhouse for suggesting "that he is a White supremacist." pic.twitter.com/XdcrZo5FCV