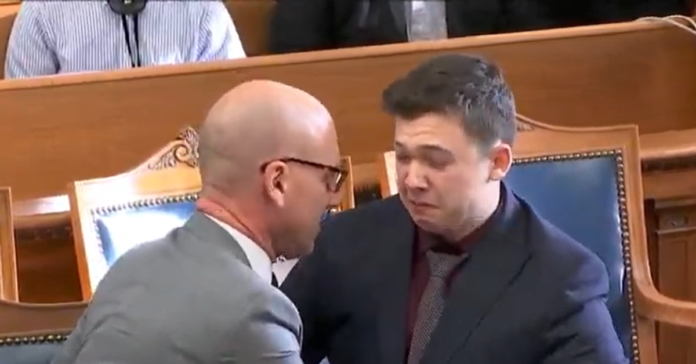 The Jury came back and found Kyle Rittenhouse not guilty on all counts. Kyle’s family, sitting behind him, dropped their jaws a little more after each not guilty count.

Kyle got emotional with his lawyers who made a huge gamble putting him on the stand. But this is not over. Kyle needs to take some people to court. The media needs to be held to account for what they did, especially if the left riots. Remember, if there is lawlessness it is because the media lied to the left and painted Kyle a cold-blooded killer.

Nick Sandman sent Kyle some words of support as he awaited his fate and they bear repeating. Nick said Kyle should sue for what they did. Nick said:

“So every single label on Kyle as a ‘terrorist’, ‘white supremacist’, and ‘school shooter’ in the streets of Kenosha, will only ever be withdrawn after the damage has been done.

“In our hyperpolarized society, the first impression of Kyle has been set in stone, probably for the rest of his life.

“So to President Joe Biden, Lebron James, Congresswoman Ayanna Pressley, and every other commentator: please be quiet.

“On November 10th, Lebron James tweeted out ‘What tears????? I didn’t see one. Man knock it off! That boy ate some lemon heads before walking into court’.

“From my own experience, the death threats, feeling of no future ahead, and that millions of people hate you, is enough to alter you in many concrete ways and permanently.

“Make no mistake: even the strongest of people cannot resist the mental impact when the media war machine targets you.

“With Kyle’s name dragged through the mud, and the clear effect it is having on him, many have started to ask the question whether Kyle should sue for defamation.

“While I am by no means an attorney, I have gained some experience on the ins and outs of defamation and can offer an educated guess on what the outcome would be if Kyle were to sue.

“Should Kyle sue? It first depends on what happens in the trial, as those elements would come into play were he found guilty. However, if Kyle is innocent it would create an easier road to winning.

“Again, the chances are still low and nothing is guaranteed in a defamation trial. Kyle should also be prepared for a long trial which will be present in his mind for years.

“I personally am still involved in six media lawsuits as January approaches marking three years since the confrontation took place at the March for Life.

“So, if Kyle is prepared to take on another burden in his early life, with the acceptance that it might result in nothing, I answer, give it a shot and hold the media accountable,” he wrote.

The Moment Kyle Rittenhouse Realized He Was a Fullly Acquitted pic.twitter.com/YBUgtdeyqA