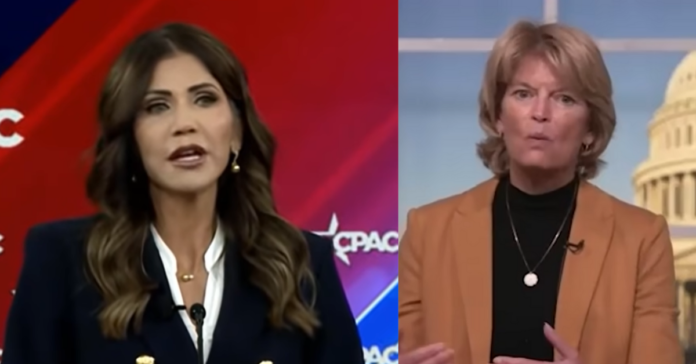 Sarah Palin, Donald Trump and many other high-profile Republicans have endorsed Lisa’s primary challenger. Noem said: “Kelly Tshibaka will be an America First senator who knows that what’s good for Alaska is also good for America.

“She will fight for the constitutional rights of all citizens and work to revive the Alaskan economy, which has been devastated by the horrendous policies of the Biden administration.

“I am proud to endorse Kelly and look forward to working with her on issues we have in common for years to come.”

“It is a high honor, and I am grateful to have the support of Kristi Noem, one of the nation’s most successful governors.

“She understands what it’s like when the federal government seizes control of huge chunks of your state’s land and when it interferes with people’s livelihoods.

“When I’m Alaska’s next senator, I will always stand up for the rights of our people, and I will never forget who hired me to represent them.

Trump is a big backer of Tshibaka. He said earlier:

“Murkowski has got to go.

“Kelly Tshibaka is the candidate who can beat Murkowski — and she will.

“Kelly is a fighter who stands for Alaska values and America First.

“She is MAGA all the way, pro-energy, strong on the Border, tough on Crime and totally supports our Military and our great Vets.”

Under Alaska’s new ranked-choice system, whether Murkowski or Tshibaka is the most popular candidate among Republicans will have less of an impact.

The nonpartisan primary system the state is implementing allows the top four candidates, regardless of party affiliation, to advance to the general election.

Website FiveThirtyEight assesses that Alaska has a 14.6-point partisan lean in favor of Republicans, however, meaning that conservative voters are expected to be the dominant force in November’s general election.

At the same time, Murkowski does not have to worry about being defeated in a GOP primary. She just has to make it into the top four in the nonpartisan primary on August 16 in order to appear on November’s ballot.

The new system also allows for voters’ second, third and fourth choices of candidates to potentially receive their backing if no contender wins more than 50 percent in the first round of counting.

The Alaska Division of Elections website explains, “The last place candidate from each race in Round 1 is eliminated and their supporters’ 2nd choice selection is allocated to the remaining candidates on the ballot.

This vote redistribution process continues until one candidate reaches over 50 percent of the votes or until two candidates remain and the candidate with the most votes wins.

In each round of counting, each voter gets one vote.”

.@govkristinoem speaks to folks in Castlewood. Thankfully, it appears nobody was hurt by the tornado. pic.twitter.com/Cgiq3HSnR4