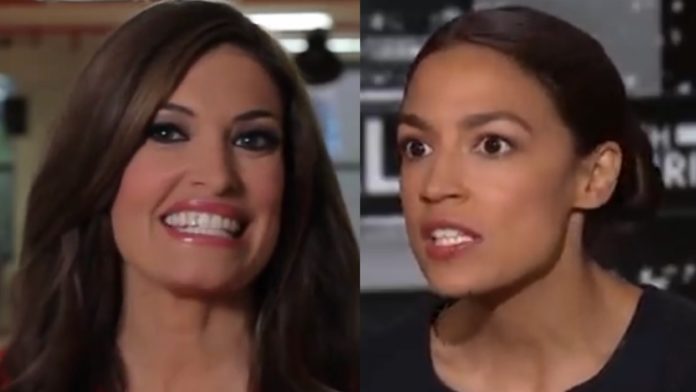 Kimberly Guilfoyle just hit back at the Alexandria Ocasio-Cortez after the darling of the left overstepped her bounds and actually threatened Don Trump Jr.

Look, one the hallmarks of our system is we don’t abuse our power – prosecutors and IRS agents and Congresswomen who have subpoena power should simply not abuse it.

These are serious issues and we do not threaten our political enemies with investigations for critical comments.

Sure there are some bad seeds, but and many others are just ignorant about how our system really works – let’s hope Cortez is just the latter as the last thing we need is more thically challenged people in the swamp.

That sounds conspicuously like a threat — and, as a former prosecutor, Kimberly Guilfoyleknows a bit about that. She’s Trump Jr.’s girlfriend and a former Fox News personality, and she — like many others — noticed the issues with this.

“Did you just threaten to subpoena someone for criticizing you?” Guilfoyle tweeted back. “As a lawyer and former prosecutor, I find this deeply troubling.”

“Every person who, under color of any statute, ordinance, regulation, custom, or usage, of any State or Territory or the District of Columbia, subjects, or causes to be subjected, any citizen of the United States or other person within the jurisdiction thereof to the deprivation of any rights, privileges, or immunities secured by the Constitution and laws, shall be liable to the party injured in an action at law, suit in equity, or other proper proceeding for redress, except that in any action brought against a judicial officer for an act or omission taken in such officer’s judicial capacity, injunctive relief shall not be granted unless a declaratory decree was violated  or declaratory relief was unavailable.

Did you just threaten to subpoena someone for criticizing you? As a lawyer and former prosecutor I find this deeply troubling. https://t.co/OqIpBkbsIS