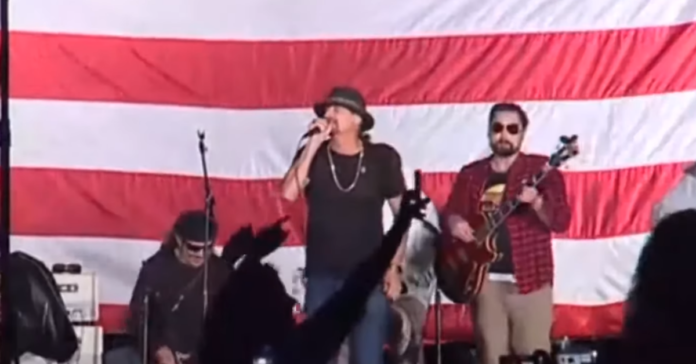 Kid Rock took the stage in support of President Trump last night despite suffering health issues and brought down the house. Prior to the appearance, he took to social media to explain why he is such a strong supporter of Trump:

“In case anyone is not clear on how much I support our President…Myself and Don Jr have a rally tonight in Macomb County Michigan for his re-election. (See video Below of concert)

I have been dealing with neck issues for years (from performing like I do for the past 30 years) and spent the morning at the Dr’s office getting 2 Steroid shots, one in my ass and the other in my neck, etc, etc.

Would make sense to cancel my appearance, but NO WAY! I will be there and will give it everything I have this evening.

That is how important getting POTUS re-elected is too me and I could care less about the continuous attacks from the left wing media, etc, that have been going on for over 4 years now. It’s the reason I have turned down countless interviews and TV appearances as I refuse to be their click bait.

I am currently filming a career documentary and will address EVERYTHING in it, on my own terms, to be released next year with new music and schedule one last monster tour (2021??) that will kick my critics in their ass and give all the love I have to the fans. (R U Scared?)

PS – I said years ago that TIME OUTS AND LAST PLACE TROPHIES would come back to haunt us!”

Kid Rock hosted an outdoor rally for the Trump campaign in Michigan on Monday night along with Donald Trump Jr. and 2020 Trump senior advisor Kimberly Guilfoyle.

The rocker, a supporter of Trump who memorably visited the Oval Office with fellow rocker Ted Nugent and former GOP vice presidential candidate Sarah Paulin, declared during the event in Harrison Township that the “fake media will say it didn’t happen.”

“You should probably hit record on your phone right now, because goddamn fake media will say it didn’t happen,” Kid Rock yelled to the crowd to open the rally.

From The Detroit Free Press:

On a night that felt as much like a late-summer concert as a political event, Kid Rock joined Donald Trump Jr. and other supporters of the president at a campaign rally east of Detroit.

The homegrown rock-rapper — one of the most prominent Trump boosters in the celebrity ranks — performed just after sunset for several thousand along the Clinton River in Harrison Township.

Hours earlier, he’d announced on social media that his next major tour, still to be scheduled, will be the last of his career.

Rock and his Twisted Brown Trucker band played a four-song acoustic-style set on a stage atop a barge, following remarks by Trump Jr. and his girlfriend, Kimberly Guilfoyle.

Boaters also converged on the water outside Bumpers Landing Boat Club, with security on jet skis keeping them distanced from the staging area.

Rock, who grew up in nearby Romeo, had flown in from Nashville earlier Monday, accompanied by a film crew shooting an upcoming career documentary.

Most in the crowd, which was largely gathered in a parking lot by the riverside, were maskless, with face coverings predominantly worn by some older attendees.