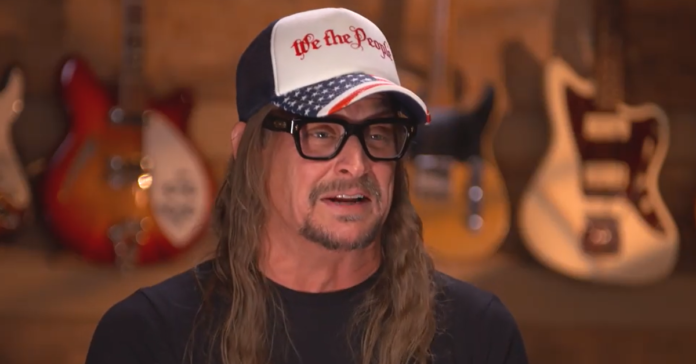 Music legend Kid Rock put the Dem Party on notice saying he would seriously consider running for political office in the future during an interview on Tucker Carlson Originals on Fox Nation, the conservative network’s streaming service.

“One day, if I ever thought, if I was bored, sitting around, really thought I could serve my county and help them out, stir things up a little bit and do what’s right, I’d have to take a hard look at it,” he said before clarifying that he has no immediate plans to take on embattled Michigan Governor Gretchen Whitmer.

“No, I like my day job,” he said. Kid Rock publicly considered a Senate run against Michigan Sen. Debbie Stabenow in 2018.

“I believe if you work your butt off and pay taxes, you should be able to understand and navigate the laws, tax codes, health care and anything else the government puts in place that affects us all,” he said at the time.

“I am definitely a Republican on fiscal issues and the military, but I lean to the middle on social issues,” he said in a 2015 interview before adding he’s “always buying more guns.

Get an exclusive look at famed rockstar @KidRock in this @TuckerCarlson Originals exclusive.

“I have everything from a Civil War cannon to an MP5 machine gun and old police guns.

“If someone invades your house, yeah, you can shoot them,” he said.

In April, Kid Rock had a surprise guest at his concert – a video featuring former President Donald Trump.

Trump said to roars from the crowd:

“Hello, everyone. I love you all.

“I hope you’re having a great time at the Kid Rock concert tonight. Quite frankly, he’s amazing.

“All of you in attendance are the true backbone of our great country. Hard-working, God-fearing rock-and-roll patriots.

“Bob is truly one of the great entertainers of our time. Not the best golfer by any means, his golf game could use a little work.

“But a great, great entertainer, and that’s why you’re there.

“Let’s all continue to love one another, fight for our God-given freedoms, and most of all, Let’s Make America Rock Again.

“Have a wonderful time tonight, God bless you, and God bless America.”

Congrats General Johnny Depp! You have won a huge battle in the war against cancel culture! Amber is paying you millions to basically let people hear she dropped a dirty in your bed! 💩😂 Keep on Kid Rockin’ in the free world. #MePoo – Kid Rock