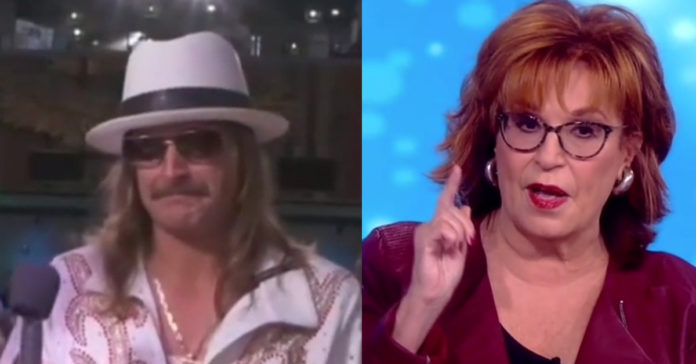 Kid Rock just announced he has a new Christmas Parade gig after the city of Nashville snubbed him for what he said about Joy Behar.

Look, he apologized for cursing on air but not for the sentiment because Joy has been feuding with Kid Rock and his friends for years. She has said some really nasty things about Kid Rock and Sarah Palin. Really nasty.

From The Tennessean: After missing his chance in Nashville, Kid Rock will be a special guest in the Leiper’s Fork Christmas Parade later this month in Williamson County.

The parade, previously scheduled for Saturday, was postponed until Dec. 15 at 2 p.m. due to inclement weather expected this weekend.

Rock reached out to organizers in hopes of participating in the parade, said Laura Musgrave, director of the Christmas parade in Leiper’s Fork.

“He has some friends out here, and we’re wild and wacky, eclectic and fun,” Musgrave said. “This parade has never been about politics — it’s a Christmas parade.”

The grand marshal will be John Schneider, who played Bo Duke in the TV show “Dukes of Hazzard.” The parade will lead off on the village’s Main Street.

From Mediate: Fox & Friends had to apologize to The View host Joy Behar on Friday after Kid Rock called her a “bitch” in the middle of an interview.

Steve Doocy spoke with Rock at his bar in Nashville, during which, the rocker gushed over President Trump while lamenting the divided sociopolitical state of the country.

“It is so hard for people to get past we can disagree and still be cordial with one another. You know, just talk about things without going for each other’s throats…”

Rock went on to talk about how “people need to calm down,” and “love everybody…except, I say screw that Joy Behar bitch.”

Doocy pushed back on that by apologizing and saying “you cannot say that…she’s just got a different point of view than you do.” Rock insisted that he was “joking”

“You apologize for that language, right?” Doocy asked him.

“I did apologize for the language. Not the sentiment,” Rock answered.

“We apologize for both,” Doocy concluded.