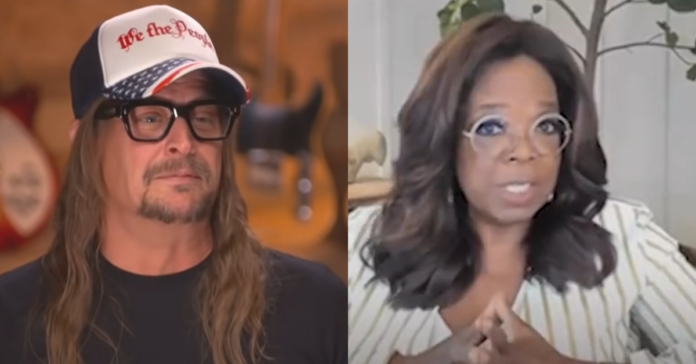 Kid Rock said: Oprah helped Dr. Oz with his career. I assume because she vetted him and found him to be a wonderful person. Now she is against him. Oprah is a fraud.”

Oprah said earlier: “At the beginning of the midterm campaigns, I said it was up to citizens to vote for who would represent them. If I lived in Pennsylvania, I would have already cast my vote for John Fetterman.

“There are clear choices and some dynamic candidates who are working to represent the values that so many of us hold dear—like inclusion, compassion, and community.

“So I ask that voters use discernment and choose wisely for the democracy of our country.”

Oprah helped Dr. Oz with his career. I assume because she vetted him and found him to be a wonderful person. Now she is against him. Oprah is a fraud. -Kid Rock.

Oprah issued a statement that said:

“In a virtual town hall, Oprah officially came out in support of John Fetterman, the Democratic candidate in Pennsylvania for Senate.

“Fetterman is running against Republican candidate Mehmet Oz, MD—better known as the TV personality Dr. Oz—who was a frequent guest on The Oprah Winfrey Show and later had his own talk series, The Dr. Oz Show.

“Now that early voting for the midterms has started, and with election day less than a week away, Oprah hosted a town hall encouraging people to exercise their right to vote.

“She moderated a panel, “Freedom Is on the Ballot,” that included Congresswoman Joyce Beatty, a U.S. Representative from Ohio, among other political thinkers, lawyers, and activists.

“When the discussion veered toward the race in Pennsylvania, Oprah commented on it for the very first time.

“During tonight’s town hall, Oprah also shared her support for several other Democratic candidates for midterm races across the country, including Beto O’Rourke, who is running for governor of Texas, and Stacey Abrams, a candidate for governor of Georgia.

It turns out Dr. Oz was not one of Oprah's favorite things pic.twitter.com/0tYKNqdxIB