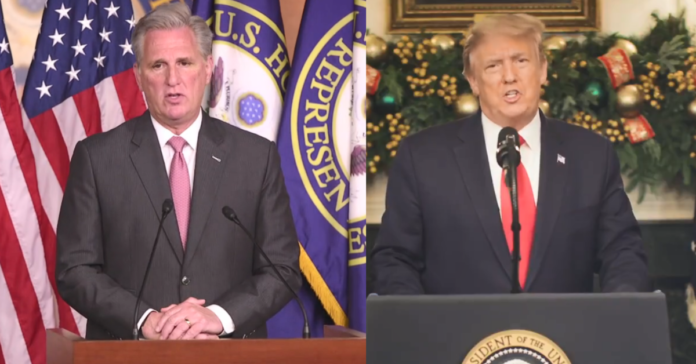 House Republican Leader Kevin McCarthy held a call with Republicans today ahead of the looming House impeachment of President Trump.

According to Fox News, McCarthy said that Trump shared some of the blame for the disaster at the Capitol as he strategized with members on how to deal with the fallout.

Corporate America is cutting off members and leadership who voted to overturn the election as well as any associated fundraising committees.

According to Jake Sherman from Punchbowl News: “House Minority Leader Kevin McCarthy and congressional Republicans have a gigantic problem. Their money spigot is getting cut off… corporations and organizations are beginning to consider them a reputational risk.”

“Personally, I continue to believe that an impeachment at this time would have the opposite effect of bringing our country together when we need to get America back on a path towards unity and civility,” McCarthy wrote to the GOP.

“Notwithstanding the Speaker’s push towards impeachment, I have heard from members across our conference who have raised at least four potential avenues available to the House to ensure that the events of January 6 are rightfully denounced and prevented from occurring in the future.”

The first option he said was, “A Resolution of Censure under the Rules of the House.”

The others were: “A Bipartisan Commission to Investigate the Circumstances Surrounding the Attack,” “Reforming the Electoral Count Act of 1887” and “Legislation to Promote Voter Confidence in Future Federal Elections.”

On a GOP conference call just now, @GOPLeader said that Trump does bear some responsibility for the riot at the capitol, but urged Republicans to be united.

McCarthy is not personally in favor of impeachment.